In 1818, a Vienna publisher released Der Wiener Kunst und Lustfeuerwerker, a how-to on creating fireworks over land and water. The 348-page volume is a pyromaniac’s Martha Stewart Living. It includes recipes for recreational fireworks, as well as thirty foldouts, painstakingly colored by hand, that depict the everyday household tools used in the process—a scale, for example, a mortar and pestle, a run-of-the-mill sieve, and what looks like a watering can. Also pictured is a felt shoe—a must for anyone working with gunpowder, as metal shoes can make sparks fly. 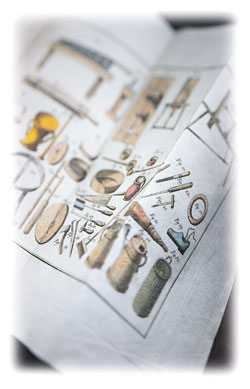 One book describes in French the fireworks display at the inauguration of the King of Spain in 1717. Among the oldest items is a 1540 treatise on the manufacturing of gunpowder. One of the most prized items is a 1635 book titled Pyrotechnia, the first English text to deal exclusively with recreational rather than military uses of fireworks.

Too bad the writers of such books lived so long before the American Revolution. Their passion for pyrotechnics has become almost commonplace, as seen every year on the Fourth of July.

Reader Responses to The Big Bang