Cell of Cells: The Global Race to Capture and Control the Stem Cell by Cynthia Fox ’83 (Norton).

Despite the strong opinions most americans have about stem-cell research, few people understand the underlying biology or the confusing, controversial, and often contradictory tapestry of emerging science. Hugely informative and eminently readable, Fox’s Cell of Cells could be a godsend to anyone wishing to become better informed about this emerging biomedical technology. 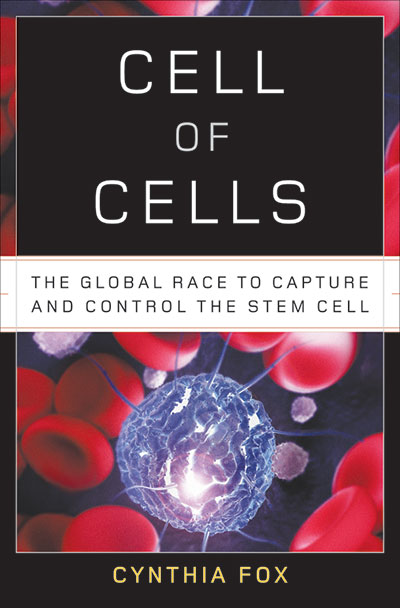 The book comprises a series of loosely connected chapters, each of which could almost stand on its own. Fox takes us through the early history of stem cells, then proceeds into the modern era, describing developments in the United States during the late 1990s. She then describes the global competition for leadership in this bellwether technology in places as diverse as California (where Proposition 71 allowed for the regulation and funding of stem cell research while opposing human reproductive cloning research), Singapore’s Biopolos, Israel, Egypt, China, and South Korea.

Fox goes on to summarize clinical applications arising from bone marrow transplantation, which is already performed more than 50,000 times per year, as well as the nascent attempts to exploit adult stem cells to do everything from mending broken hearts, preserving deteriorating brain function, eliminating immunosuppressive drugs for organ transplantation recipients, and even to curing infertility. Along the way, Fox provides a detailed discussion of cloning, which begins with the creation of a stem cell from an adult cell. The book closes with a remarkable chapter describing the rise and fall of Woo-suk Hwang, the South Korean scientist whose very genuine accomplishments with stem cells were undone by his subsequent fabrications, in what ultimately turned out to be the greatest scientific fraud since the fossils of the Piltdown man were “discovered” in England in 1912.

Fox is a strong writer—her style is that of an in-depth reporter—who combines scientific insight, understanding of the arcane world of biotech business, fastidious attention to details, unusual glimpses into the strengths and foibles of academic scientists, and an elaborate portrayal of the setting in which these stories take place. Her book is comprehensive and includes virtually all the key players, potential applications, and epiphenomena in contemporary stem-cell science.

Like most scientists, Fox finds President Bush’s stem cell policy anathema, but she nevertheless maintains a balanced perspective in her writing. She is a reporter and a storyteller, not a sermonizer. Which are better, embryonic or adult stem cells? Fox is very clear that this question remains moot because (except for bone marrow transplantation), neither type of cell has yet been conclusively demonstrated to accomplish anything in well-designed clinical trials.

Readers with a science background will have an advantage over those who do not, but even the uninitiated will appreciate Fox’s incisive portrayal of the gestalt of the field, the public hype that surrounds it, and the raw ambitions of its key players.

Professor of Medical Science Michael J. Lysaght is the director of Brown’s Center for Biomedical Engineering.

Reader Responses to Promises to Keep