Forget the War on Terror

George W. Bush’s war on terror would be better defined as a war on “an ideology,” Pennsylvania’s former U.S. Senator Rick Santorum told a packed audience in the Salomon Center on April 5. He warned that radical Islam poses as dangerous a threat to the United States as Nazi Germany posed to Britain in 1940. In contrast to World War II, however, the United States faces the Islamic world alone, without the help of Europe. 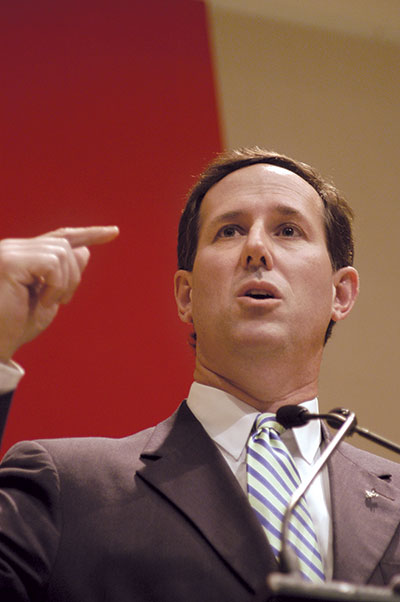 An outspoken critic of abortion and same-sex marriage who lost his Senate seat in November, Santorum steered clear of domestic social issues in his remarks at Brown, other than to joke about the irony of speaking at such a liberal campus. “I feel very honored to have the opportunity to be here today,” he opened his speech, which was sponsored by the Student Lecture Board. “It says a lot for the students here at Brown [that they] would invite someone like me to come to a school like this.”

Instead, Santorum warned that unthinking acceptance of multiculturalism has blinded liberals to the dangers of radical Islamist beliefs. “I believe in equality,” Santorum said. “I do not believe that all cultures need to be or should be respected.”

He argued that much of the American public’s opposition to the war in Iraq stems from ignorance of the terrorists’ ideology and its roots in Islam’s turbulent history of clashes with the West. “The American public has very little understanding as to what this war is about,” Santorum said. “There have been a lot of failures of this president; what he has done most tactically wrong is his mis-definition of the enemy.” In contrast, Santorum said he defines the enemy as “Islamic fascists” who “want to conquer the world for Islam.”

Santorum argued that the United States must engage in the battle now. He said that both liberals and conservatives must defend “our” cultures and values, and “rebrand [our nation] as a true American democracy.” He added, “This war will bring this country together more than maybe any other war … because of the nature of the enemy we face.”

Throughout Santorum’s talk, his audience, made up mostly of students, remained respectful, laughing several times when he referred to his own conservative views. “Obviously you can tell if you were a liberal or conservative if you thought the sixties was a good or a bad decade,” he said.

He left little doubt about where he stood.

Reader Responses to Forget the War on Terror