All Life’s a Stage, and God Is in the Audience 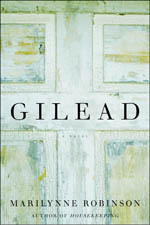 Surely the greatest mystery of life is that we exist in time; most philosophy attempts to surmount it; all religions are informed by it, perhaps Christianity above all. A Christian man’s encounter with the implacable constraints of the human life span lies at the heart of Gilead, Marilynne Robinson’s second novel. The book, which follows her first, much acclaimed novel, Housekeeping, by more than two decades, succeeds as few novels do in giving narrative flesh to abstract theological investigations.

Gilead takes the form of a long letter, a life’s account, written in 1956 by John Ames, a seventy-six-year-old Congregationalist minister in Gilead, Iowa. Ames was begotten of a line of preachers. His grand­father, a fiery Old Testament character, came from Maine to Kansas as a Free-Soiler. In league with John Brown, he lost one eye and acquired righteous blood on his hands. Ames’s father, on the other hand, was a peaceable man who quarreled with his father’s embrace of violence, though he later made an arduous journey through the Kansas wilderness to honor the old man’s grave.

Ames lost his first wife to childbirth, and the baby died shortly afterward. Although a conscientious minister to his congregation, Ames spent the following decades lonely and bereft, the dishonorable actions of an errant namesake acting, it emerges, as further gall to his childlessness. Arriving at his late sixties, however, Ames made a happy marriage to a much younger woman, from which proceeded the six-year-old son to whom he writes this letter.

Dying, Ames is troubled that he is abandoning his little family to material hardship and dwells on the indisputable fact that his son has known him only as an infirm old man. His letter is a way of enduring in time, of reaching into the future to represent himself to his son. In its course, the epistle—for it merits the name—becomes a great summing-up of the place of individual lives and of their extension through generations in time. It affords, too, glimpses of God’s providence and grace at work in the world, specifically in repeated manifestations of the two sacraments accepted by Calvin: the Eucharist and baptism.

Thinking of his own father feeding him bread when he was a child, Ames writes, “I remember it as if he broke the bread and put a bit of it in my mouth, though I know he didn’t.” Memory makes a sacrament of this act and conflates it with a communion between father and son. The old man records how he made both a sacrament and generational communion by breaking a bit of bread during the ceremony of the Eucharist over which he officiated in his own church, and feeding it to his own son: “I know what I wanted in that moment was to give you some version of that same memory, though only now do I realize how often it has been in my mind.” Throughout the book, the message resounds that God is present in time and that His purpose is realized in the begetting by each generation of further generations, and of parents honoring their children, and of children honoring their parents.

Unlike a secular view that indulges God and religion by granting them metaphorical standing, Robinson’s thoroughly religious view reserves metaphor for finding a way to think, given our limited human faculties, about what God is up to. “Calvin,” the old man tells his son, “says somewhere that each of us is an actor on a stage and God is the audience.” That metaphor, he explains, “makes us artists of our own behavior, and the reaction of God to us might be thought of as aesthetic rather than morally judgmental … it suggests how God might actually enjoy us.”

Gilead is purely Christian and Calvinist in the same way that Flannery O’Connor’s fiction is purely Christian and Catholic. Neither writer is fooling around; neither employs the signs and referents of Christianity as mere tropes. Still, Robinson, like O’Connor, can be read with pleasure and enlightenment by anyone who is willing to accept, on its own terms, the genuine article: a work of art.

Katherine A. Powers lives in Cambridge, Massachusetts, and writes a literary column for the Sunday Boston Globe.

Reader Responses to All Life’s a Stage, and God Is in the Audience