This January, Paul Ware gathered together a few dozen Afghan tribal leaders, provincial bureaucrats, and Pashtun elders for a three-day conference on government management. There were classes on how to hire and fire an employee, how to delegate responsibilities, and how to set salaries. It may all sound laughably basic to the average American, but these Afghans, says Ware, "haven't had the benefit of this kind of training. They want to be good public servants, but they don't always know how." 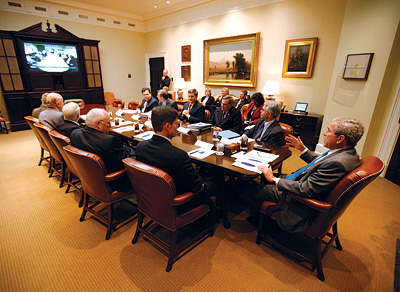 Ware works as a field program officer for the United States Agency for International Development (USAID) in southeastern Afghanistan, where he oversees the agency's reconstruction efforts in Paktika province along the Pakistani border. Amid constant warring between the Taliban and the U.S. military, and with the risk of triggering an improvised explosive device every time he drives along a road, Ware tries to make sure that the rebuilding of the country goes smoothly. One day he may be overseeing the digging of a new well or the building of a school, and the next he's helping a newly installed government official draft plans to bring trash removal to a village. "There's no place I'd rather be," Ware says.

All the same, it's the last place he ever thought he'd wind up. After graduating from Brown, Ware, who grew up on Cape Cod, attended medical school on a U.S. Navy scholarship and worked as a physician with the U.S. Navy SEALs and deep-sea divers. He treated divers for everything from the bends to broken arms, but he also found himself with the group of SEALs that did rescue and salvage operations for the EgyptAir plane crash off the coast of Nantucket in 1999. He searched for floating bodies and the mechanical parts needed to determine the cause of the accident. He did the same a year later when the USS Cole was attacked by terrorists while refueling in Yemen.

After the Navy, Ware went to work in the private sector, but not surprisingly found it dull by comparison. Ironically, he found he had more freedom to practice medicine in the military than in the private sector. "When I was in the Navy," he says, "I was essentially running my own practice. I wasn't confined to ten-minute patient visits." Ware had always been fascinated by international service, so he earned a master's degree in international public policy and applied for a position with USAID.

He arrived in Afghanistan last August. Paktika province is about the size of Vermont and encompasses twenty-two individual districts, each run by its own Afghan administrator. It has long been considered one of the dangerous areas in Afghanistan, thanks to the Taliban and Al Qaeda fighters who stage raids from across the border in Pakistan. The provincial leaders "were unable to even structure a meeting among themselves when I first got there," Ware says. Meanwhile, the central government led by President Hamid Karzai would issue edicts, but in Paktika the provincial leaders lacked the know-how—and sometimes the will—to implement them.

Slowly Ware helped the Afghans build a local government. "They have actually come together," he says. "They have an agenda. They are in touch with people in the province and know what their needs are. This is a major step forward." All the same, the Taliban, who were ousted from power when the United States invaded Afghanistan in October 2001, are resurgent. They hide bombs along roads and bombard military bases with rocket fire. Ware says "to some extent, the Taliban have grown stronger," but he is also somewhat heartened to see more and more ordinary Afghans "standing up to them." Most of Paktika remains without running water or electricity, and so far the central government's efforts to modernize the region haven't had much effect. Ware says, "It's a struggle to get the policies that come from the central government extended and reaching out to the local levels."

In March, Ware was invited to the White House to brief President Bush on the situation in Afghanistan. He says he told him that the top priority of the reconstruction effort must be education. "Those types of programs are what's going to help Afghanistan stand on its own two feet one day so the U.S. can go home," Ware says. In the meantime, Ware has returned to the country and the people he is growing to love. "I'm seeing the optimism among the Afghan people themselves," he says. "That optimism is contagious."

Reader Responses to The Know-How Guy