As 400 freshmen settled into their new digs 70 years ago, one of the most violent storms ever to hit New England surged up the East Coast. On September 22, the infamous hurricane of 1938 struck Rhode Island. More than 680 people lost their lives, thousands were stranded in stores and offices, and entire beachfront communities toppled into the sea when a 12-to-16-foot storm surge gouged the coastline and flooded the low-lying business district of downtown Providence. 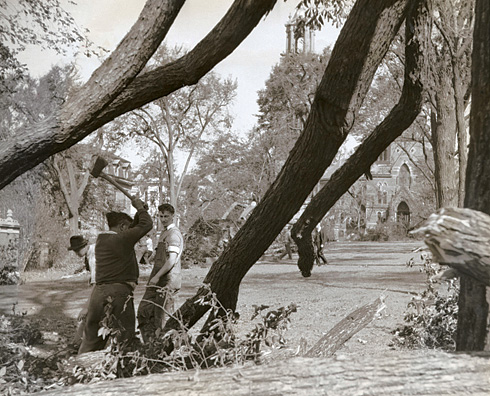 High atop College Hill, Brown survived with relatively minor damage—most of it to the ancient elms on the Front Campus, which the 180-mile-an-hour gusts snapped and wrenched from the soil. The November 1938 Brown Alumni Monthly ran the photograph above of undergraduates chopping timber there. Students worked all night, the BAM reported, hauling debris from fallen chimneys, torn roofs, and broken tree trunks to clear the campus and the thoroughfares around it.

When the waters surged into Providence, "trapping people in automobiles and offices, Brown students by the score were on hand to form human life-lines," the BAM reported. The infirmary turned its facilities over to the Red Cross, and the manager of Faunce House found provisions to feed civilians unable to get home.

Another highlight noted in the BAM: five freshmen were "in the tank," taking their then-required swimming test when the roof to the natatorium was swept away by the wind. What a welcome.