Imagine if the government put $1,000 into a savings account in your name on the day you were born. Later, for every dollar of your own money you put in, the government would match it up to a total of $500 per year. You would have to wait until your 18th birthday to withdraw any money, and you would have to spend it on such things as enrolling in school, buying a house, or starting a small business. The benefit could last your entire life. 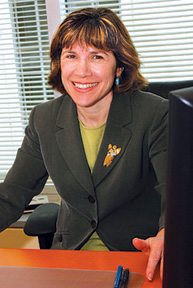 Courtesy Andrea Levere
Andrea Levere wants to fight povertry by giving every U.S. kid a savings account.
This is precisely the kind of incentive Andrea Levere, president of the Corporation for Enterprise Development (CFED) in Washington, D.C., would like to provide to people who are looking to improve their economic situation. CFED has already started twelve pilot programs based on this approach, though the money has come largely from foundations and corporations, not the government. Levere says the programs are already working.

"We've been able to definitively prove that low-income people, given a structure and incentives, would save and save at rates we never really expected," she says. "Given the opportunity and hope, people will do it."

Levere came to the CFED in 1992 several years after finishing an MBA at Yale, where she was part of a group of students who helped to create a class focused on achieving social change through economic development. CFED, with its aim of helping the poor to buy homes and grow equity, was an ideal fit. "How do people become rich?" Levere asks. "They become rich by owning assets, by owning a home, by starting a business. We do this really well for upper-income people but terribly for lower-income people."

The savings-account program, known as the Saving for Education, Entrepreneurship, and Downpayment (SEED) Policy and Practice Initiative, began in 2003. Pilot projects were set up on the Cherokee Nation in eastern Oklahoma, in Harlem, and in Puerto Rico, as well as in some other states. There are now more than 1,250 individual SEED accounts holding assets worth more than $1.6 million.

Levere says the SEED initiatives are similar to the microfinance programs in the developing world, in which lenders give small financial grants to individuals to start promising businesses. The money is often routed through a bank, giving recipients access to financial institutions and allowing the banks to monitor how the money is being spent. "We thought, 'Why can't we do something like that in the U.S.?'" Levere says.

Levere considered aiming the government-sponsored nationwide savings-account program primarily at poor children. According to CFED's statistics, nearly 30 percent of Americans don't have an account with a mainstream financial organization. But Levere says that the results of focus-group testing favored making the program open to everyone. She says that when only the poor were included, people in the focus groups assumed that poor people could not entirely be trusted with the money.

"When we talked about it being for poor children, even Democrats said it would be filled with fraud," Levere says. Aiming the program at all Americans seemed to make more political sense.

Anticipating opposition to a government-funded program, CFED has drafted plans to set up a national philanthropic organization through which individuals or foundations pay the matching funds that wind up in the savings accounts. It would be modeled, Levere says, on those Third World programs in which donors "adopt" a child and follow his or her progress. In this case the child would be from America. "We're calling it the American Dream Match Fund," Levere says. "For $3,000 you can change a person's life."

For the past eight years, Levere and CFED have had little luck getting Congress to consider a national savings-account program. But she has persevered, and with President Barack Obama in the White House, she believes SEED's fortunes may be about to change for the better. "The chances of getting it passed now are better than they've been in a very long time," she says.

Reader Responses to Money for Success