If you thought getting into Brown could not possibly get any more competitive, think again. This year was the most competitive ever.

According to dean of admissions James Miller '73, the University received 25,000 applications for the class of 2013, a 21 percent increase over the previous year and the highest number for Brown on record. Because the size of the class stays more or less constant at 2,700, the acceptance rate was 10.8 percent, the lowest ever, and a considerable drop from last year's 14 percent. 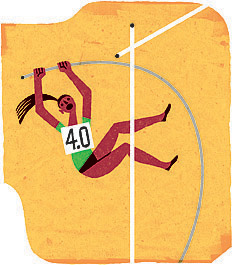 Timothy Cook
"The academic quality was the highest it has ever been," Miller says. He explains that 96 percent of the applicants were among the top ten percent of their high school class academically and that "thousands and thousands" of the students had one or more perfect scores on their S.A.T.'s. "The bar gets raised for everybody," Miller says. "There's simply a higher threshold for admission."

Brown's trend was consistent across the Ivies. Harvard saw a 5 percent increase in applicants, according to the Harvard Crimson. Dartmouth applications increased by 10 percent and its acceptance rate hit a record low 12 percent, the school's student newspaper reported.

Miller attributed the changes to the better financial aid packages Brown and other Ivy League institutions now offer. He also says Brown this year began accepting the so-called Common Application that is used by more than 100 other institutions. This, he said, made it easier to apply; you could fill out one application and send it to Harvard, Yale, Princeton, and Brown.

Reader Responses to Measuring Up