In 2006, Rose Shuman found herself in a hotel room waiting to be summoned by the technology company that had flown her out to California for an interview. To prepare to impress her potential employer, she started brainstorming ideas that would demonstrate her creativity. Suddenly, the image of the intercoms that sit on the wall beside the entrances of Brown dorms popped into her head. She realized they could be the basis for a vast network linking the developing world to the Internet. "My whole plan came out almost wholly formed, pretty much down to the name," Shuman says. 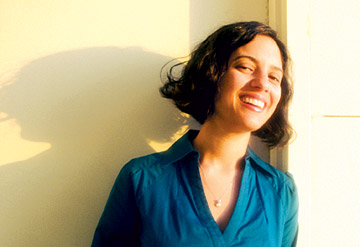 Shuman, who lives in Santa Monica, California, spent the next year founding the nonprofit company Open Mind and developing a product she calls the Question Box. Unlike campus intercoms, Question Boxes are not for asking a friend to come down and let you into the dorm; they are for enabling residents of remote Third World villages to reach an operator in a nearby city who has immediate access to the Internet. The caller pushes a green button, poses a question to the interviewer, and then the operator uses the Web to provide an answer.

The idea is to use the technology that is already established in the developing world—cell phone networks—to provide access to a tool that uses a technology that is seldom found there—Internet, Ethernet, or landlines. "It's about slowly changing people's horizons," Shuman says. Instead of coming in and telling people on the ground, "We know what you need, and it's X," Shuman says, her nonprofit allows people to decide for themselves whether and how a Question Box might be useful to them.

At Brown, Shuman concentrated in international development and visual studies, then went on to earn a master's in development studies. She spent part of her freshman year working in an orphanage in southern India and part of her junior year in Kampala, the capital of Uganda. When she was in India, she says, the village where she lived had only one landline, which was housed in an old woman's home. People would line up to use it. By the time she'd arrived in Uganda, she says, "There were guys on the streets who had a mobile phone and who, depending on their mood, would let you use it for money or for free." It was all part of a telecommunications revolution in the developing world in which villages that didn't even have reliable electricity could still get cell phone service.

Shuman started Open Mind with her own money and began e-mailing around to Ugandan and Indian professors whose names she had found on the Internet. In September 2007, Shuman and her collaborators installed the first Question Box in a town just outside New Delhi, then stepped back to see how the villagers would use it.

High school students began calling up to ask for results of exams they'd taken. Their scores on the tests could determine the rest of their professional life, and they'd earlier had to travel for hours to a nearby city to get them. Now they could simply call the operator on the Question Box and have him look up the results on the Web.

Farmers used the Question Box to learn the open-market value of their crops. Typically, they sold their goods to middlemen who then transported them to market and sold them. The farmers were at the mercy of these middlemen to figure out how much to charge. Now they could use the Question Box to find the real value of their crops. "It allowed farmers to negotiate better," Shuman says.

Sometimes operators had to explain they didn't have all the answers, as when one villager asked to look up "Who made God?"

After the experiment in India, several nonprofits and businesses also offered support and technical expertise, and now there are three pilot programs operating around the world, two in India and one in Uganda. It is just a start, but Shuman has worked to perfect the design and cut costs so that a Question Box now costs around $300. "We just want to open the shop and say, 'Okay, if you want to do this, we will teach you how, so you can go out and do things we could never imagine,'" she says.