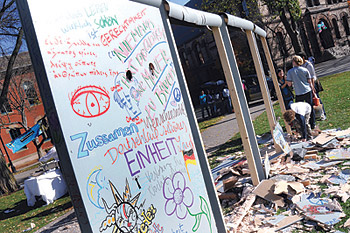 Frank Mullin
The aftermath on the main green.
In mid-November the German studies department marked the twentieth anniversary of the fall of the Berlin Wall by erecting a new one on the College Green. Students mimicked the graffiti on the original wall with their own freedom messages. After a spoken-word competition on the subject of freedom, students were given hammers to smash the new wall in solidarity with those who did the same in Berlin on November 9, 1989.
What do you think?
See what other readers are saying about this article and add your voice.