Retreat of the Secular

Hamra Street is a main artery in Beirut that was once known as that city's "Champs Elysées." During the 1960s and early 1970s, it bustled with theaters, nightclubs, and cafes where Arab dissidents, Palestinian exiles, and Lebanese of all political persuasions engaged in heated intellectual discussions. It represented, says New York Times foreign correspondent Anthony Shadid, "the most open, sophisticated, and pluralistic space in the Arab world." 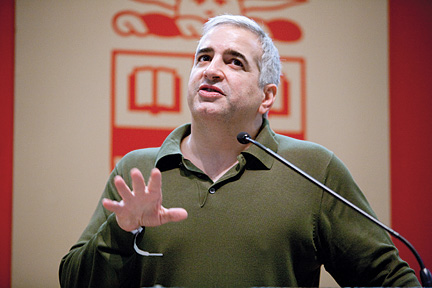 Scott Kingsley
Anthony Shadid visited Brown the week he won a Pulitzer Prize and became a father.
No longer. In a talk he gave at Brown on April 12 as part of the Peter Green lecture series on the modern Middle East, Shadid said the street today "is a shadow of what it was."

After civil war broke out in Lebanon in 1975, he explained, the country shattered into rival ethnic and religious groups, and as a result the theaters and cinemas are now shuttered. Shadid said the members of the country's various sects sometimes refuse even to break bread with one another. "Each tribe comes away with its own existential sense of itself," he noted.

The fate of Hamra Street, Shadid said, typifies the descent into sectarian politics all across the Middle East: "Hamra as an ideal is gone and so is what it represented."

Shadid, an American of Lebanese descent, worked in the Middle East in the 1990s for the Associated Press and more recently covered the Iraq war for the Washington Post. He moved this year to the Times.

On the day he was at Brown, Shadid learned he'd won his second Pulitzer Prize for international reporting. It followed right on the heels of the birth of a son. Shadid noted that it's quite a week when you can say, "winning the Pulitzer was the second best thing that happened to me."

But his lecture itself was pretty grim. He said the Middle East he once admired is gone. "There are really no secular movements of import these days," in the region, Shadid said. "In those secular ideologies, there was a universality that transcended the parochial identities of the past. That's simply no longer the case." Instead, politics is characterized by "unyielding discourse."

Reader Responses to Retreat of the Secular