Don Eversley has worked with the rock band Living Colour, and overseen the day-to-day operations of New York City's sprawling charter school system. But if you ask him today where "the real action" is, he'll tell you Bridgeport, Connecticut. 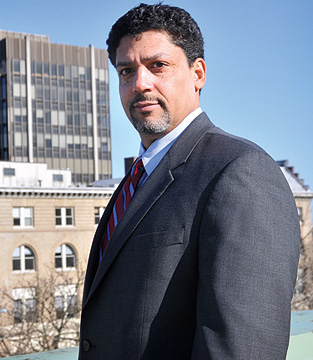 Eversley grew up in New York City, concentrated in Afro-American studies at Brown, and then went to the University of Pennsylvania Law School ("I was mildly interested in law" he explains). He did the corporate law thing for a few years, completed a stint as the New York City Cultural Affairs department's general counsel, and then transitioned over to the indie rock music scene. In addition to doing legal work for Living Colour, he worked as an entertainment lawyer for less-known artists such as Michael Hill's Blues Mob and jazz musician Jerome Harris. Eversley also created his own record label to market music from the Caribbean Islands, where his father was born.

It was in 2001, however, that he developed a yen for public service. He started at the Board of Education in New York, spent a year at the Bronx Overall Development Corporation, then moved to Providence where incoming mayor David Cicilline '83 was promising to revitalize the city's downtown. As head of the Providence Economic Development Partnership from 2004 to 2007, Eversley was vital to that effort.

Shortly after Mayor Bill Finch took office in Bridgeport, he recruited Eversley, who found the city to have unexpected strengths. "What I've actually discovered," he says, "is that despite its reputation, Bridgeport has many strong middle-class neighborhoods, good businesses, and great parks." To spur economic development in Bridgeport, Eversley doesn't rely primarily on offering tax incentives for out-of-town businesses. He says that approach leads to a "big game" where "cities are played off against one another" and businesses wind up the winners. Instead he's pursuing a strategy of "organic economic development." His office works with local businesses looking to expand or get more access to capital. "Help the people who are already here and have been through tough times," Eversley says. "It's cheaper and more effective because those companies are already invested in the community."

So far, Eversley has spearheaded the development of a 150,000 square-foot shopping center and a 50-acre parcel of land for mixed-use development. Still, the Great Recession has hit Bridgeport hard. A number of projects have been put on hold and the city has had to scale back its long-term plans. "The days of huge factories are not coming back," Eversley says. "The challenge is how do you move these medium-size cities into the new post-industrial economy of the 21st century?"