When Dilip D'Souza arrived at Brown to study computer science in the early 1980s, he was, by his own admission, "a wide-eyed grad student." He loved American music and had grown up hearing his parents' stories about being graduate students in the United States a generation earlier. But he labored under some misconceptions. "For example, a lot of us Indian males tend to think that American women are all loose and they're going to jump into bed with all of us," he says with a self-deprecating chuckle. "After a while I started thinking to myself, 'Where are all those damned loose women?'" 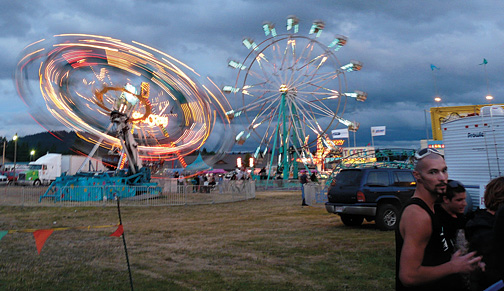 Dilip D'Souza
D'Souza sees America in an Idaho county fair.
Over the next ten years of living in the United States, first in Providence and later in Texas, D'Souza, a journalist and former computer scientist, rid himself of many of his misconceptions. But after going back to live in Mumbai for eighteen years, he realized he felt like an outsider in both places. "What does it mean to say, 'I'm Indian; you're American?'" he wondered. "I started getting obsessed with [this concept] when we had this war with Pakistan ten years ago. The amount of hatred and rhetoric directed towards Pakistan seemed to me a recipe for some kind of disaster. I want to at least make the case that there are more positive reasons to be Indian than just hating Pakistan." So he returned to the United States to see if he could learn anything that might help him understand his own country's history and conflicts.

Roadrunner: An Indian Quest in America chronicles three separate road trips D'Souza took throughout the Southeast, Southwest, and Midwest during 2007 and 2008. The book was inspired in part by Bernard-Henri Levy's book American Vertigo: Traveling America in the Footsteps of Tocqueville; after reading it, D'Souza thought to himself, "Why didn't an Indian do this?"

The result is thirty-seven loosely connected essays, in which D'Souza uses such disparate experiences as a Harley-Davidson rally in Sturgis, South Dakota, and an Obama campaign event in Selma, Alabama, to reflect on issues of nationalism, patriotism, and vintage American cars. D'Souza is particularly preoccupied with graveyards and with memorials to wars and battles long past, and during a visit to Shiloh National Military Park, in Tennessee, he notes that the battleground's memorials honor regiments on both sides of the Civil War. He wonders whether an Indian war memorial he once visited might ever honor Pakistanis who have died in the decades-long conflict.

"Here on display is the only way patriotism makes sense to me," he writes. "Not reviled when it belongs to the 'other' guy, but celebrated for the ideal it was to him too."

In New Orleans, a church group helping rebuild houses reminds him of volunteers in India after the tsunami and cyclone. "These selfless people who came and worked there for no reason at all, just got up and said, 'I feel I want to do something for my fellow human beings.' I just cannot think of anything else that's patriotism. That's it for me."

Reader Responses to What Is Patriotism?