Masumi Hayashi-Smith grew up in Tacoma, Washington, the daughter of aJapanese-American mother and a white father. Her mother had grown upBuddhist, her father atheist. As adults, her father turned to Buddhism,and her mother became an atheist. Hayashi-Smith followed her father’slead: Buddhism “just feels natural to me,” she says. “It’s the way I’moriented toward the world.” 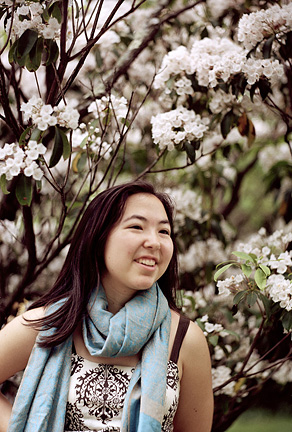 In the summer of 2009, using funds she was awarded through the SolsberyEndowed Fellowship, Hayashi-Smith traveled to Sri Lanka to work with aBuddhist group called the Sarvodaya Shramadana Movement (Sanskrit for“awakening of all”). One of the organization’s objectives is to improverelations between the majority Sinhalese ethnic group in Sri Lanka andthe Tamil minority. Only a few weeks before Hayashi-Smith arrived inthe country, the twenty-six-year-old civil war between the two groupshad ended, after a Tamil resistance group was defeated by thegovernment.

Hayashi-Smith traveled around the country with Sarvodaya Shramadana’sShanthi Sena or “Peace Brigades,” which focus on the nation’s youth.The program ran camps in rural areas, where roughly 200 Sinhalese,Muslim, and Tamil kids, spent three days together. During that time,the teens stayed in local villagers’ homes, sharing a bedroom with amember of a culture they knew little about and might even haveconsidered an enemy. During the day counselors staged team-buildingexercises, and the camp held ecumenical services, during which campersrecited or rallied around such Buddhist mantras as, “We are all one,”and “There’s no defined self.”

At the end of the program, Hayashi-Smith was amazed. “People keptgiving these speeches that there were no differences between them, theywere all one, they were all Sri Lankan,” she says. “These people gotreally really close to each other. They would shed tears when they hadto part.”

Hayashi-Smith wrote a research paper on what she’d observed in SriLanka, concluding that the program was highly effective. But she alsohad concerns that the camps’ emphasis on unity and a shared nationalityshunted aside the very real grievances and needs of the Tamils.

Next year Hayashi-Smith will return to Sri Lanka on a Fulbrightscholarship to work again with Sarvodaya Shramadana as well as severalother youth peace programs in the region. Whatever qualms Hayashi-Smithhas about the program, she still considers its an exemplary model ofputting Buddhist principles into practice to improve the world.
“Because of these camps,” she says, “these kids all realized they havethis common humanity and the capacity to love one another.”