Growing up, Aaron Schatz devoured books by baseball statistician and historian Bill James. Now, as editor-in-chief of FootballOutsiders.com a site devoted to pigskin statistics and analysis—Schatz is doing for football what James did for baseball: bringing the world of sports analysis to a whole new level. 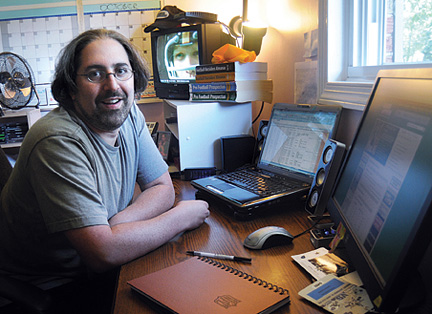 Frank Mullin
Aaron Schatz says his passion for football statistics grew out of his economics concentration at Brown.
Football Outsiders began in 2003 as a way for Schatz to poke holes in a Boston Globe column about the New England Patriots' running game. To prove his theory, Schatz pored over every play the Pats made during the 2002 NFL season. When he was done, he had not only debunked the column, he'd compiled an impressive pile of stats as well. Since then, Football Outsiders has caught fire. During football season it can attract more than 25,000 hits a day, and it has become a regular feature on ESPN.com.

The site, Schatz says, is "for more intellectual football fans. It started out as advanced statistics, but it's developed way past that. It features intelligent football talk of every kind."

Still, statistics are at the core of the site, whose motto is "Innovative Statistics, Intelligent Analysis." Like Bill James, Schatz has created stats that he believes give a more nuanced picture of the competence of teams and players. For example, DVOA, or Defense-Adjusted Value Over Average, "breaks down every single play of the NFL season to see how much success offensive players achieved in each specific situation compared to the league average in that situation, adjusted for the strength of the opponent." Got it?

The seeds for Football Outsiders were sown at Brown, even though, Schatz says, he and his friends rarely talked football on campus. It was only in Boston in the years after graduation that Schatz, with his Zeta Delta Xi fraternity brothers and Football Outsiders cofounders Benjy Rose '96, Jason Beattie '97, Ian Dembsky '99, and Al Bogdan '00, became immersed in fantasy football. What began as a hobby has turned into Schatz's career. He has recruited nearly a dozen national writers to write for the site, and he writes regular Football Outsiders columns for ESPN. In addition, he edits the annual Football Outsiders Almanac, an Amazon best-selling title, and this year Schatz was even a guest blogger at The Atlantic magazine's website.

Schatz does all this from his home in Framingham, Massachusetts, which he shares with his wife, Kathryn, and seven-year-old daughter, Mirinae. Not surprisingly for a self-described Patriots fan, he predicted early that the Pats will win their division this season.

An economics concentrator at Brown, Schatz says he probably spent enough time as a disc jockey at WBRU to earn a second concentration there as well. He jokes that his formal training in statistics consisted of Economics 162 at Brown and the "talking paper clip" from Excel. Still, he especially credits economics professors David Weil and Rachel Friedberg with teaching him how to see the world from an economics viewpoint, something that's served him well as a guru of football statistics.

As for the comparison to Bill James, Schatz is flattered. "It's quite an honor to be compared to him, " Schatz says. "He likes what I do. Now he asks me questions as opposed to just me asking him."

Dana Rae Laverty is a freelance writer based in Providence.

Reader Responses to Geeking Up Football