Growing up on the Navajo reservation in western New Mexico, Winifred Jumbo '10 often watched her grandmother butcher sheep, sometimes even helping out. Only this year, though, did she have to do it on her own. She now can say from personal experience that slaughtering and dismembering a sheep is "hard, mentally and physically." And it didn't make it easier that she was doing it in front of a cheering crowd. 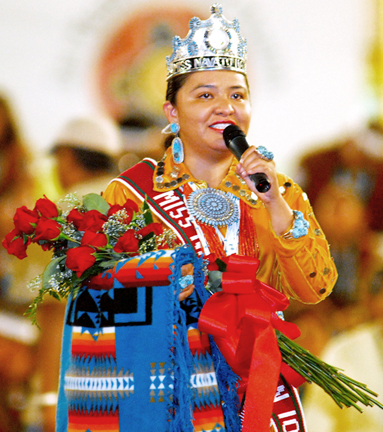 Donovan Quintero/Navajo Times
Jumbo after being crowned Mis Navajo Nation.
When, on September 11, Jumbo was crowned Miss Navajo Nation, she had been through no ordinary beauty pageant. Sure, it included an evening-gown competition and various talent events, but it also required contestants to team up and slaughter sheep, in keeping with the central place shepherding occupies in Navajo culture.

Promoting Navajo culture has long been a preoccupation for Jumbo. At Brown, she studied anthropology and ethnic studies, and she wrote an honors thesis on the preservation of the Navajo language. In her senior year, as head of the student group Native Americans at Brown, Jumbo helped host the seventh annual All Ivy Native Council Conference and powwow. Jumbo says a lot of her conversations with fellow seniors at the Conference were about "when they go home to the reservation—how to fit back into where they're coming from."

As part of the Miss Navajo competition, Jumbo had to answer questions about the Navajo nation's government and history and, she says, defend the idea of "a woman being a leader in our Navajo society, which is not seen as the most popular thing." For her contemporary talent, she performed a dramatic monologue; for her traditional talent, she and her brother composed and performed a Navajo warrior dance, which pays homage to warriors from Navajo history as well as to Navajo men and women currently serving in the armed forces. Her brother sang a healing song as they danced. "It had a lot of spiritual meaning," Jumbo says. Many segments of the event were conducted in the Navajo language, which Jumbo learned while growing up.

Jumbo says she was worried at first about going to Brown. Her concern was that, as a first-generation college graduate from a community with an unusually high number of high school dropouts and few job opportunities, she would "have to leave the reservation to have a career." But as Miss Navajo she is entitled to a yearlong salaried position as a tribal employee, which means that, at least for the short-term, she can spend considerable time living and working on the reservation. Although she'll be based in an office in Window Rock, Arizona, she will also travel the country as a goodwill ambassador promoting Navajo language and culture.

"I experienced going to a four-year institution while coming from a very small community," she says. "I can be a guide for them—what exactly does going to college mean? College is something unheard of in many communities."

Reader Responses to Lighting the Way