A Life of Letters

When Julie Seltzer puts her quill to paper, she must follow strict procedures. Her quill must be a hand-sharpened feather and dipped in a special soot-based ink that never fades. She must write on parchment made from the skin of a kosher animal, and if she makes a single mistake, she must begin all over again. She must speak every word aloud before she writes it down. And before she writes the first word, she must state, "I am writing these words for the sake of the sanctity of the Name." 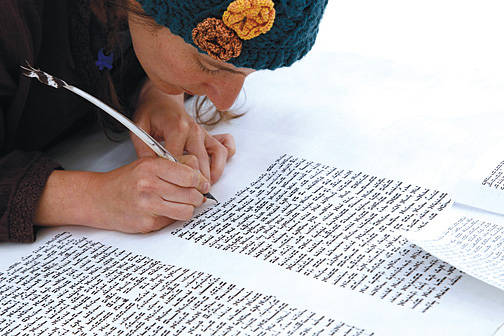 Seltzer is a Torah scribe. She is thought to be one of only ten female scribes in the world. For thousands of years, Jews have followed strict and elaborate rules for transcribing the five books of Moses onto parchment scrolls. But none of these ancient laws says anything about a scribe's gender. The term in Hebrew for a woman scribe is soferet, a feminized version of sofer, the word for male scribe. "My love for the Hebrew letters is not a logical love, but an instinctual love," Seltzer, who lives in San Francisco, says. "I'm drawn to [the letters] from my depths, not my head. The scribal process provides access to an intimate relationship with the Torah in its most elemental state—the building blocks of the letters."

Seltzer grew up in Yardley, Pennsylvania, without much religious observance. Instead of going straight to college, she spent a semester at a kibbutz in Israel. It was here that she fell in love with Hebrew. "There was something about the sound of Hebrew that was so deeply familiar to me, in a very primal way," Seltzer explains. "Strangely, Hebrew felt like my mother tongue." She continued to study Hebrew at Brown, even as she concentrated in theater arts.

Seltzer moved back and forth between Israel and the United States after graduating, continuing her Judaic studies and working as a teacher at a Jewish day school and a baker at the Isabella Freedman Jewish Retreat Center in Connecticut.

One day Seltzer found herself creating an art piece using stencils of the Hebrew letters and, as she arranged the letters, she had an epiphany. "It hit me, seemingly out of the blue, that I really wanted to learn how to write letters the same way they are written in the Torah," she says. The Torah has its own special script, developed by scribes over thousands of years.

In January 2008, Seltzer began learning the laws of sofrut, the scribal arts. She worked on a Torah restoration project, participated in a communal women's Torah project, and wrote out the Song of Songs as part of her training. Nearly a year later, she got her first solo project— sitting at a small desk in the main gallery of San Francisco's Contemporary Jewish Museum and writing a Torah. The museum called the live exhibition of a Torah scribe "As It Is Written: Project 304,805." The number refers to the number of letters in the Torah. During her twelve months on display, Seltzer wrote for five hours a day, five-and-a-half days a week, taking periodic breaks to give lectures and answer questions about scribing.

Seltzer expects to finish the project by January. The completed Torah will belong to the Contemporary Jewish Museum, and be lent out regularly to Bay Area congregations in need of a Torah. "There is a mystical idea that the world was created not just through speech, but through the letters themselves," Seltzer says. "One Jewish tradition describes wisdom as the ability to properly combine these letters—divine Boggle, you might say."

Reader Responses to A Life of Letters