Get On With It

Among the 45,000 registered runners at the New York City marathon in November, there is no shortage of compelling stories. Few of the runners, however, had behind them the odd medical history of the man who wore bib number 7844: John Stamler '98. 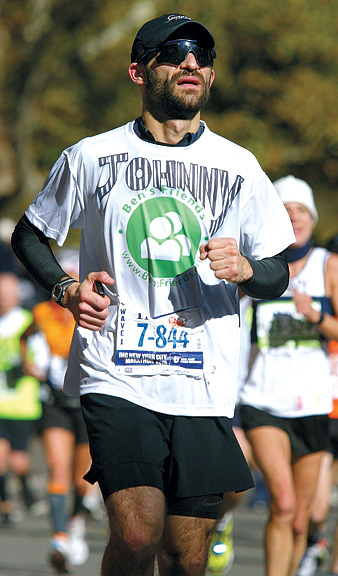 When he was growing up in Rumson, New Jersey, Stamler was diagnosed with Von Willebrand's disease (VWD), a rare genetic illness that impairs blood clotting. He was six years old. Although he had type 1 VWD, the most moderate form of the disease, on some days his nose bled five or six times. Even getting a cut was potentially dangerous.

Stamler got through school and eventually made his way to Brown, where he concentrated in economics and organizational behavioral management. By then he had learned how to manage his condition. He'd played ice hockey and soccer in high school, and at Brown he joined the golf team, though he says he "didn't play that much." He got just enough exercise to stay fit and healthy.

Then, in May 2003, he had a cycling accident shortly after he'd moved to London for work. His femur snapped, and he needed to have a hip screw inserted. In six weeks he was cycling again and a year later he completed a half-ironman triathlon in Florida.

Two years later, Stamler had another cycling accident, shattering the tip of his elbow. He had surgery, but then three weeks later he slipped in a London subway station and broke the same part of his elbow. "I ripped up all the stuff the doctors had fixed up," he says.

In October, 2005 Stamler was hit by a cab in New York City, resulting in a hairline fracture of his shoulder. He didn't need surgery, but, he says, "My shoulder has never been the same since." The following year his elbow became infected, and to reconstruct the bone his doctors had to remove the screws and plates they'd previously inserted.

After all this, many people might conclude that they were at least accident prone, and perhaps cursed, and might decide that the best place for them is on the living room sofa watching television. But not Stamler. Instead he ran the 2008 London marathon. "I'm very determined, very focused," he says. "I've always just gone on with life."

Then things got more serious. While preparing for December 2009 surgery to fix a deviated nasal septum, Stamler underwent an electrocardiogram that revealed a congenital problem known as an atrial septal defect, a small hole between the upper chambers of the heart. Over time, this can lead to heart disease, hypertension, or stroke. The hole can be closed in a number of ways, but with his blood disease Stamler chose the most traditional and time-tested solution: open-heart surgery.

The operation was performed last May at the Cleveland Clinic in Ohio. Two months later Stamler was, he says, "doing pretty much any activity I wanted." (It helped that the open-heart surgery was robot-assisted, which is less invasive and results in quicker recuperation.) In November, he ran the New York City marathon to raise money for Ben's Friends (bensfriends.org), a charity that aids people with rare diseases. He raised $6,700 in pledges. Stamler's time was three hours, thirty-six minutes, and fifty seconds.

But Stamler wasn't done with doctors. A day after the race, a dermatologist surgically removed a mole on his back. His response is to keep on running. He's already signed up for next year's New York City marathon.

Reader Responses to Get On With It