By Lawrence Goodman / March/April 2011
March 16th, 2011
Geologist Jim Head '69 PhD spends a good deal of his time scouring the solar system for water and signs of extraterrestrial life. But back here on earth, he is on a different sort of quest: to taste every beer made on this planet.

Head is one of the country's foremost experts on planetary geology and is deeply involved in NASA's Mars exploration program. He also happens to be passionate about beer. It's difficult to overstate how passionate: "I remember when Kennedy was shot," he says. "I remember when we landed on the moon. And I remember the first really good foreign beer I ever tasted." 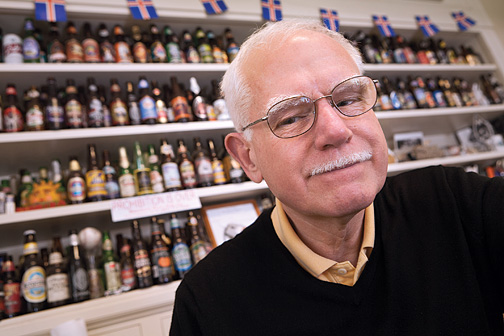 Photos by Scott Kingsley
Jim Head and his brews. Grad students created the label with his frozen likeness, below left.
That was back in the 1970s, when the beer industry, Head believes, was in a sorry state. Conglomeration was going on everywhere, with small, fine microbreweries—the term didn't even exist then—either being guzzled down by the giants or going out of business.

"It was to me a terrible time," Head muses, only half-joking. "Like a famine in the overall scheme of human civilization."

It was about then, during a trip to a scientific conference in London, that he had one of his sudsiest epiphanies. He passed by a pub, decided to go in, and ordered a beer.

"I took a big swallow because I was really thirsty, and I nearly spit it out because it was warm," he says. "Seconds later I was like, 'You know, this tastes pretty good.'"

The realization dawned on him that Americans drink their beer cold so they don't have to taste it. He vowed to take advantage of his many professional trips around the world to sample as many beers from as many different countries as possible.

Head has turned his office into something of a brewing shrine. Beer bottles are everywhere, running three rows deep on the shelves. He estimates that he has several hundred bottles in his collection, about 70 percent of which he has gathered on his travels and 30 percent of which were given to him by graduate students who themselves were no strangers to the yeasty nectar. 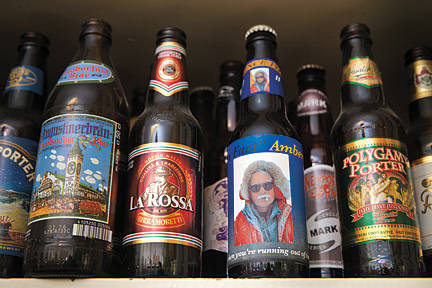 "I don't collect bottles," Head makes clear. "I drink the beers and keep the bottles."

Several years ago, his graduate students printed up custom labels and slapped them on a six-pack of brew-skies. Each features a photo of Head in a snowsuit in Antarctica, to which he often travels because the terrain is similar to that on Mars. The titles on the bottles are phrases Head commonly says to his students, such as "Press on" and "In fact." Underneath the titles is the kicker: "For when you're running out of time."

These days, of course, microbreweries are everywhere, mixing up one-of-a-kind concoctions that can give most European beers a run for their money. "I'm in heaven now," Head says. "The microbrew craze has been my savior."

But there is still one significant downside. As Head wrote on his website, "The explosive development of microbreweries has, regrettably, caused me to seriously question whether I will ever achieve a lifelong goal of tasting one of every type of beer brewed in the inner solar system. But the quest goes on."

Speight's Gold Medal Ale (New Zealand), "Because it is available in Antarctica!"

Reader Responses to Pressing On