How To Watch Baseball

Watching any baseball this spring? Hardcore fans will already know a lot of the subtleties of the game, but Dan Kantrovitz '01 and Todd Carey '93, both former minor league baseball players—Kantrovitz in the Cardinals organization and Carey for the Red Sox—recommend that you pay close attention to a few things in particular. Kantrovitz now oversees the international scouting department for the Oakland A's. 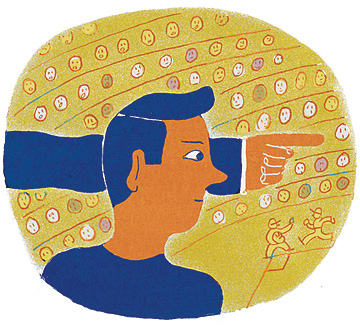 Watch the coaching staff. Usually, one member of the staff is responsible for the positioning of each defensive player on the field. He will slightly alter the location of each player based on such factors as a hitter's strengths and weaknesses, the tendencies of the starting pitcher, the number of base runners and outs—even weather conditions. Look for the guy in the dugout waving a white towel to get his players' attention.

What does a bench coach do anyway? TV cameras tend to catch the bench coach just sitting there near the manager. But his role is important, if sometimes subtle. For example, the catcher, whether he's calling the pitches himself or relaying them from the manager or pitching coach, has enough to worry about without over-thinking what the base runners are up to. Watch the catcher glance over at the bench coach, who will signal pick-off attempts, pitchouts, or even pitcher sidesteps to keep the base runner off guard.

Don't forget the Weather Channel. How wind might influence the carry of a throw or the flight of a batted ball can dictate certain strategy decisions by a coach. The third-base coach in particular has got to be part weatherman.

Reader Responses to How To Watch Baseball