Will Allen was talking to a group of kindergartners, graduate students, and teachers gathered around raised beds in a Providence school playground in early April. 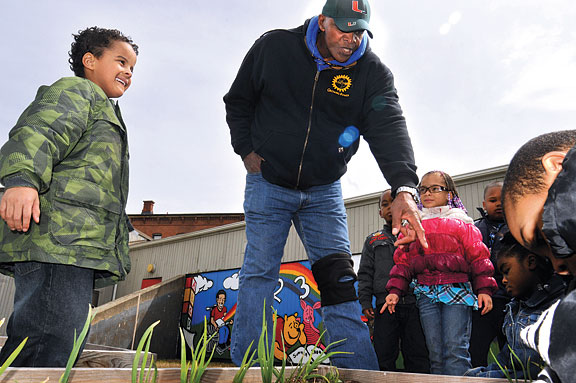 Kindergartners proudly show Will Allen their garlic plants at the John Hope Settlement House in Providence.

“He comes from Milwaukee, Wisconsin,” explained Kathryn DeMaster, a visiting assistant professor in the Center for Environmental Studies, “which is a city a lot like Providence. He teaches people to grow food.”

Then she added, “He used to be a professional basketball player.”

“He’s bigger than every basketball player!” exclaimed one awestruck boy.

Allen, who is about as tall and muscular as the mythical Paul Bunyan, was visiting the John Hope Settlement House with Brown students who’ve been helping the children grow vegetables as part of a DeMaster-taught class called Sustenance and Sustainability. “I want to see more Ivy-educated farmers,” she said, noting that grad students, too, need basic farming lessons.

The winner of a MacArthur genius grant, Allen runs Growing Power, a $6 million nonprofit that has created a model for mass-producing compost and building inexpensive greenhouses where city residents can raise and purchase food. Working in cities across the United States and as far afield as Kenya and the Ukraine, Growing Power conducts agricultural research (think in-vitro fish farming and multistory greenhouses) and teaches people to grow produce in “food deserts” and “fast-food swamps”—neighborhoods too poor to attract supermarkets.

Behind the school, DeMaster showed Allen the barren former site of a dry-cleaning facility. It could be farmed, Allen suggested, but the highly toxic soil should not actually be tilled. Better to cover it with a one-way fabric barrier that allows rainwater to soak in while preventing the toxins from leaching up. A thick layer of wood chips could then be placed above the barrier and raised compost beds built atop that.

Allen was in Providence thanks to a Bell Gallery exhibition of photographs from A Natural Order, a book by Lucas Foglia ’05 that chronicles the lives of people farming off the grid in the southeastern United States. When Bell curators asked Foglia to suggest speakers to accompany the show, he solicited recommendations from local farmers. Allen, he says, was their top choice.

The son of a sharecropper, Allen attended the University of Miami on a basketball scholarship and was the sixtieth overall pick in the 1971 NBA draft. He never played in the NBA, however; he spent the next season with the Floridians of the American Basketball Association. He then worked in marketing at Procter & Gamble before buying a Milwaukee nursery that was in foreclosure. Although his mother wanted her children to avoid farming, he explained, his father felt it was important to know how to feed yourself. That’s a message Allen wants all children to absorb, whether in Milwaukee, Chicago, or Providence.

The kindergartners waited by their garden beds. (“It’s nap time,” their teacher warned. “This is tough.”)

Allen pointed to some sturdy green shoots. “What are you growing here?” he asked.

“When did you plant it?”

“When will you harvest it?”

“When the leaves get brown and bend over,” a girl in a fluffy pink jacket said earnestly.

“Garlic is good for your stomach,” Allen advised. The kids looked nonplussed.

“What else have you been growing here?” Allen asked.
The kindergartners let loose a volley: Peas! Snap peas! Carrots! Spinach! Radishes! Tomatoes! Green beans! DeMaster said the vegetables the kids grew and ate supplemented the low-quality offerings of their government-subsidized school lunches.

That evening, Allen preached the gospel of soil to an overflow Granoff Center audience of Brown students and faculty, as well as local farmers, activists, planners, and politicians. The first step toward turning urban lots into food production, he said, is growing soil—compost—on a massive scale, contracting with supermarkets, coffee shops, farms, and (in Milwaukee’s case) breweries, to recycle their refuse.

“Then you add worms,” he said. “We started with thirty pounds of worms. Now we have 7,000. It’s a great way to engage kids: put a couple pounds of worms in their hands.”

And don’t make it all look too icky. “Aesthetics are really important,” he said. “All it takes is one person complaining to shut you down.” Grow your compost at the back of the lot, he urged, or out in the country where it won’t trouble neighbors.

He cited the example of Milwaukee’s Community Food Center, which produces 150 crops, as well as tilapia, chickens, ducks, rabbits, goats, and bees—enough to feed 10,000 people. It also sells worm castings, honey, cheese, and $85-a-yard compost, he said: “the highest quality organic compost in the world!”