Change at the Top

When Michael Goldberger retired as director of athletics on June 30, Pro-vidence College graduate and former Hofstra athletic director Jack Hayes became Brown’s fourteenth director of athletics. “During two decades as a university sports administrator,” Vice President for Campus Life and Student Services Margaret Klawunn said in a prepared statement, “Jack Hayes has developed a deep understanding of the role of athletics—how it can thrive in an academic setting and how it can enrich the campus experience for all students.” Hayes’s experience comes from several schools of varying athletic quality. After graduating from Providence College in 1989 and earning a master’s in sports management from the University of Connecticut, Hayes became a sports administrator at Fairfield, St. John’s, and Fordham universities. Then, in 2001, he returned to UConn as associate director of athletics before moving on to Hofstra in 2004. Under his leadership, Hofstra athletes have received ten academic all-American honors and sixteen conference Scholar-Athlete of the Year awards. The average athlete’s GPA was 3.0 or better, while his teams have competed in twenty-seven NCAA tournaments. The BAM caught up with Hayes shortly before he began his new job. 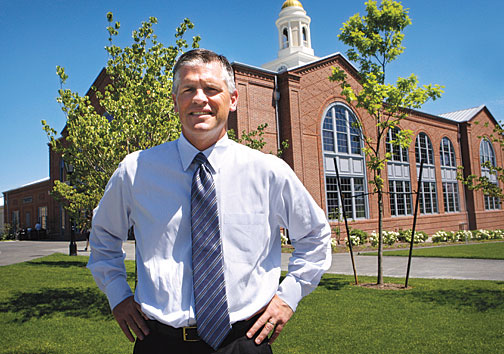 Frank Mullin
Jack Hayes on the Brown campus. "In this business," he says, "it's important to find a school that shares your philosophy."

BAM What attracted you to Brown?
HAYES Its reputation, its tradition, and its potential. I had been the director of athletics at Hofstra for eight years. It had been a great experience, and I enjoyed it there very much. I knew some things about Brown having grown up here, and having spent one year working [on College Hill]. I knew enough to be interested in the position, and the more I spoke to people at Brown about it, the more excited I became.

BAM How happy are you to return to Rhode Island?
HAYES I am thrilled. In this business, it is important to find a school that shares your philosophy about the role of an intercollegiate athletics program. I found that school at home in Rhode Island.

BAM Who were some of your mentors and what did you learn from them?
HAYES Jeff Hathaway, who recently served as the chair of the NCAA Men’s Basketball Committee and was the director of athletics at the University of Connecticut, is someone from whom I have learned so much. He provided me with many opportunities while I was at UConn.Mike Tranghese, the retired commissioner of the Big East Conference, is a close friend who has taught me a great deal about analyzing situations and seeking advice.

Stuart Rabinowitz, the president of Hofstra, gave me the opportunity to be an athletic director when I was thirty-seven. He helped me develop a greater perspective into the role of athletics on a college campus. Dave Gavitt, who served as the athletic director and basketball coach at Providence College and founded the Big East Conference, was a family friend and the reason I pursued a career in intercollegiate athletics. He taught me the importance of involving people in the decision-making process. He had such a passion for the role of athletics in education.

BAM What issues do you want to address right away?
HAYES I want to learn as much as I can about Brown athletics and about the culture of Brown University, and I’ll do that as quickly as possible. The issue of resources is a concern for almost every intercollegiate athletics program. We faced it at Hofstra, just as many other schools have, so the more I learn about Brown, and the challenges that are specific to Brown, the more quickly we can decide how to best proceed.

BAM What are some of your long-term goals for Brown sports?
HAYES We want to win Ivy League championships, and we want to do it in a manner that makes the Brown community proud—students, alumni, faculty, staff, donors, and friends. We want student-athletes to graduate and feel very good about their academic and athletic experience at Brown so they can go out and be our best spokespeople for encouraging the next generation of men and women to come to Brown, to wear the Brown uniform, and to represent Brown on the field of play.

BAM What do you hope to accomplish in your first year?
HAYES I want to be very visible within the athletic community, within the university community, and I want to make sure I do that from day one. That requires reaching out and meeting as many people as possible. I look forward to those opportunities.

BAM Do you anticipate making any major changes?
HAYES No, I think whenever you come in as someone from the outside, it is important to assess, to communicate, to watch, and to learn. The more of that you do, the easier it is to make decisions down the road.

BAM What do you see as the most challenging aspect of the job?
HAYES We have standards to uphold and we want to be as competitive as possible, but it is imperative that we do so with integrity and a commitment to academic excellence. Other schools are trying to do the same thing. As any institution tries to improve or enhance its program and take steps forward, its competitors are doing that as well. So, the challenge is to self-evaluate and find ways to get better, but with the understanding that our competition is trying to do the same thing.

BAM Anything else to add?
HAYES I am really excited to be at Brown. As someone who grew up in Rhode Island, went to games at Brown, competed against Brown, and then worked at Brown, I’m very appreciative of the opportunity to return as the director of athletics.

Reader Responses to Change at the Top