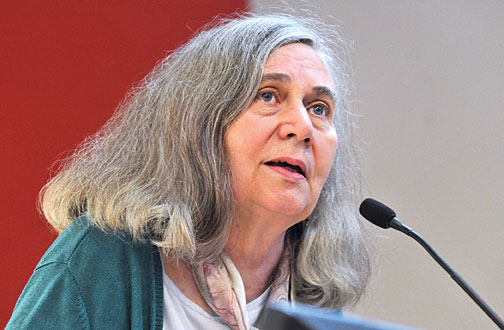 Frank Mullin
Acclaimed writer Marilynne Robinson '66 wants to redefine students success.
“How can a stupid country full of stupid people maintain a university system that’s among the best in the world?” And she added, “The fact that certain schools fail is not a systemic problem. It’s a solvable problem.”

Robinson teaches in the University of Iowa’s Writers Workshop. But she’s best known as the author of three best-selling and critically acclaimed novels—Housekeeping, Gilead (which won the Pulitzer Prize), and its companion volume, Home (which won the Orange Prize). She’s also a prolific essayist who revels in thorny subjects, especially religion and its relationship to science.Back at Brown to receive an honorary doctorate this spring, she delivered a Commencement Forum on the future of teaching.

Robinson lamented “the supposed crisis” in U.S. education, and the false notion that testing prepares children to compete as workers.

“If another country is prospering, we ought not to take that as bad news,” she said. “Americans fear that our claim to success is only economic,” which fosters insecurity.

“Students’ high potential is too often subverted,” she continued. “We don’t give them autonomy. We don’t give them poise.” As a result, she said, many students don’t rise to the level of their abilities. “They think real culture is done elsewhere by other people.”

One of Robinson’s suggestions was for students to read “more Dickens and less theory about Dickens.” She said she’s considered an antiquarian because she’s interested in Moses, Calvin, and Marx. “I teach the Old Testament,” she said. “And Paradise Lost.”

When asked about the Great Books, Robinson observed that they’re now seen as paternalistic. But that attitude “is pretty authoritarian itself,” she said, concluding, “Every American with any literary bent ought to go face to face with Herman Melville.”

Reader Responses to About Great Books