For Whom the Bells Toll

It’s been more than thirty years since the music director of Connie Engle’s church in Bloomfield Hills, Michigan, asked what seemed like a very simple question: Would anyone in the parish be interested in playing the church’s new set of handbells? Having studied clarinet and violin as a child, Engle thought it sounded like fun. Bell ringing soon blossomed into a passionate hobby. “I just love the sound of bells,” she says. 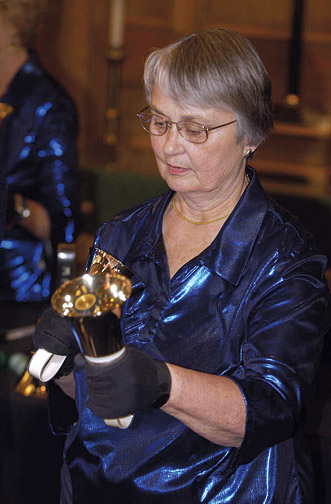 Courtesy Connie Engle
Engle adores the sounds of handbells.
Engle concentrated in music theory and performance at Brown, focusing in particular on singing and the voice, and joined the University Chorus and Chapel Choir. For most of her working life, Engle was a librarian. She earned a master’s in library science at Indiana University and later got a job at Wayne State University in Detroit. In 1991, she retired to Hendersonville, North Carolina. “My husband and I were tired of being cold in Michigan,” she says.

In Hendersonville, she promptly started the Blue Ridge Ringers, a fifteen-member group of campanologists, which is what bell ringers are officially called. The group plays more than a dozen gigs a year. The Ringers have covered a number of different genres, from arrangements written just for hand-bell groups to Christmas classics.

The Ringers use handbells. But Connie also participates in English change ringing, the 400-year-old art of playing bells in church towers. She estimates that she has been to roughly a third of the church towers in the United States. She has also twice traveled to England to take bell ringing classes.

Ringing bells isn’t quite as simple as grabbing a bell and shaking it. For example, with English change ringing, a person pulls on ropes to ring the bells in a series of different mathematical patterns. Handbell ringing on the other hand is more traditional, though the complex techniques and timing make it a difficult art form to master. There’s also the not-so-small matter of standing for hours during a performance, which Engle says can be grueling.

“Both types of ringing are definitely group endeavors requiring teamwork,” Engle says. “Both are active sports, if you will, requiring both physical and mental activity. And, when done well, both produce wonderful sounds.”

Engle says she wants to go on ringing bells as long as she physically can, and intends to keep up her current pace of performing twelve to fifteen concerts a year.

“My future plans,” Engle says, “are to keep on ringing!”

Reader Responses to For Whom the Bells Toll