If you’d asked Alison Klayman, the filmmaker of Ai Weiwei: Never Sorry, on graduation day where she saw herself in five years, she’d have shrugged her shoulders and given the definitive “Well, I don’t really know. I’ll go abroad for awhile.” 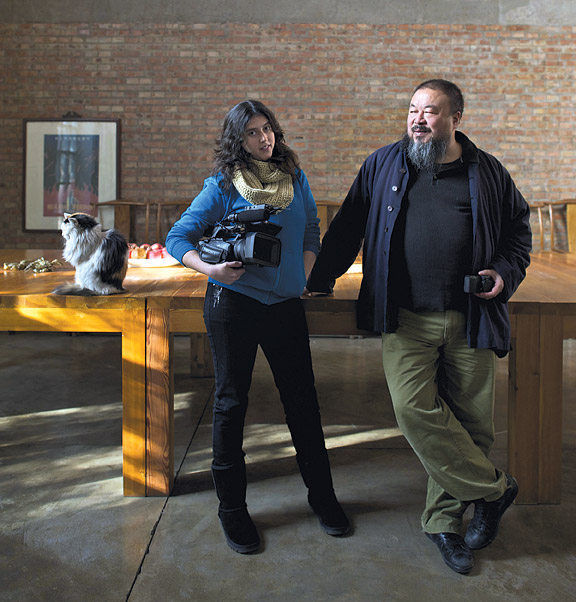 A month later, knowing neither Mandarin nor anyone in China, Klayman flew to Beijing, which would become home for the next four years. “It was a very Brown decision,” she says, “to just go for it, immersing myself in a different place, learning a new language.” She supported herself by freelancing as a radio journalist and picked up Mandarin working on sets for feature films. “I got to work on a Jackie Chan movie!” she says. “I’m a big fan.”

At twenty-seven, Klayman now has her own feature film and fans. Two years after her move to Beijing, she met Ai Weiwei, the outspoken Chinese artist and political activist who had just boycotted the Beijing Olympics after designing the iconic Bird’s Nest Stadium. “It was totally random,” Klayman says. “My roommate was working in a gallery where he was having a show. I had just bought a video camera, and she knew I needed some money. She asked if I could make a short film for the show.”

After two years she was still filming, and as Ai began taking more outspoken stands against the Chinese government, the project became a full-time job. She went with Ai when he bypassed the government and launched a yearlong personal investigation into student casualties during the 2008 Sichuan earthquake. She was with him when he was beaten by police in Chengdu, a beating that caused internal bleeding. And she was also there to document Ai’s transformation from visual artist to social-media genius. Her camera catches him posting incendiary anti-government tweets as he tells her, “Twitter is the most important medium of our time.”

Klayman’s film follows Ai up to his heavily publicized detention in spring 2011, but she insists that Never Sorry isn’t meant to tell the classic story of the dissident artist. “More than anything, I thought that the film was an examination of this guy’s character, that through it you would see a lot of new things about China,” she says. “It is not because he is an artist that he is being detained. It’s because of the way he is speaking and using social media. That’s the point. He is an artist who is determined to reach beyond just the art world or art works.”

After winning the Special Jury Prize at Sundance last winter, Never Sorry hit screens nationwide in August and is being talked about as an Oscar prospect. Klayman, however, seems less concerned about awards season and more focused on how the film is affecting individual viewers.

“Maybe a week after seeing the film, something will come up when people will ask themselves, ‘What would Weiwei do in this situation?’” Klayman says. “Maybe they’ll be a little more badass, a little more outspoken, a little more fearless.”

Reader Responses to Larger Than Life