October 17, 2012—Long lines of people waited to pass through metal detectors today at the Rhode Island Convention Center in downtown Providence. Absent, though, was the impatience so often evident when similar lines at airports grow too long. Why was everyone so sanguine? They were waiting to see the man Brown had invited to address them: His Holiness the 14th Dalai Lama. 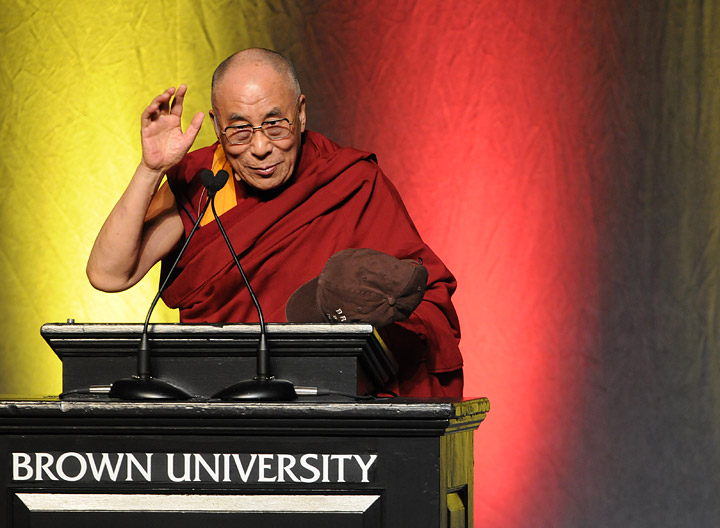 Frank Mullin/Brown University
The Dalai Lama linked the global to the personal, tying his theme of global peace to the simple happiness each of us seeks. "Peace is not something sacred," he said.

Once the crowd of 5,600—most of them Brown students and faculty—was seated, the Dalai Lama emerged from backstage accompanied by members of his entourage and Brown President Christina Paxson. Once onstage, she welcomed this spiritual leader of Tibet who, she said, “commands neither an army or a navy,” and who looks to “resolve, not exploit” the world’s conflicts.

By then the Dalai Lama had slipped on a Brown baseball-style cap and was peering out at the audience with his photogenic smile. His talk, a Stephen A. Ogden Jr. ’60 Memorial Lecture on International Affairs, was a wide-ranging meditation on “A Global Change: Creating a Culture of Peace.” Talk seemed a particularly apt description: he riffed informally on his subject for almost an hour and a half without a single piece of paper in sight. Through it all he navigated his way skillfully through noble sentiments, anecdotes from his world travels, a history of the last hundred years, and offhand insights into international relations.

He warmed up by presenting the truisms that human beings have more in common than they often realize, and that violence only leads to more violence. Linking the global to the personal—a link that ran throughout his lecture—he tied his theme of global peace to the simple happiness each of us seeks. Freedom from violence in our inner lives as well as our outer ones, he hinted, is really all that each of us wants. “Peace is not something sacred,” he said. “We want that peace because we want a happy life."

At 77 years old, he continued, he had lived through “a century of bloodshed” that included World War II, two atomic bombings of Japan, the Korean War, the Vietnam War, the nuclear arms race, and various civil wars. This century’s terrorism, he said is a “symptom of last century’s mistakes.” 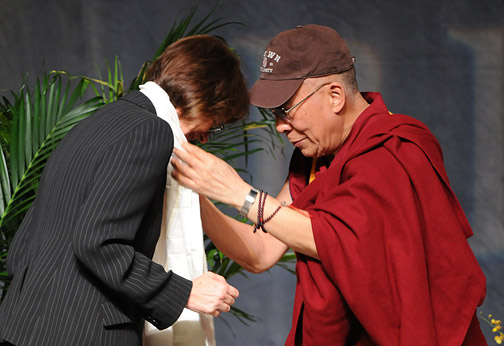 Frank Mullin/Brown University
The Dalai Lama presents a Khata, or traditional Tibetan offering scarf, to President Paxson after his talk.

Then the Dalai Lama paused and said to his audience, “I want to address mainly the youth.” He asked for a show of hands by people under 30, and most hands in the room went up. How many were under 20, he wanted to know, and how many were 15 or less? These, he said, all made up the generation of the 21st century. To the audience members in their 70s, 60s, or 50s, he said, “We are the generation of the 20th century. So our century is gone."

Now the most important question, he continued, is what kind of century will the 21st be? The responsibility for this century rests “on younger people’s shoulders. Not my shoulders. For me it’s time to relax. We are watching you.” Yet what effect can one person have on the powerful currents of history? To answer that question one has only to look at the popular movements that have succeeded in modern history, he argued. “During the 1960s and 70s,” he said, we faced the “threat of nuclear holocaust. That gone. Not by force, but by popular movement.” The Soviet Union dissolved because of its own people. In the Philippines, President Marcos relinquished power because of that country’s own popular movement.

Although the Dalai Lama’s talk ranged widely over international relations, science, and religion, what united it were two threads: his own unwavering optimism and his Buddhist belief in compassion. He hoped the 21st century would be known as the century of compassion, he said, when people would go beyond their own self-interest to look at others and say, “Their problems are my problems. Their happiness is my happiness.”

As for his optimism, it emerged most vividly in the Dalai Lama’s description of the audience he had with Queen Elizabeth in 1996. (“Very nice lady,” he said.) He recalled that he was eager to ask the queen one thing: “Since you observed almost all of the 20th century, would you say we are becoming better, worse, or the same? Without hesitation, she said, ‘Better!’ When she was young no one talked about civil rights or the right to self-determination, “ and those are universal principles today.

After answering a few videotaped questions, the Dalai Lama, never one to appear pretentious or take himself, a world religious leader, too seriously, ended on a mischievous note. “Please think [about] some of my points," he said. "If you feel some interest, then think more. And you yourself investigate these things. And then try to share with more people." But if you feel these points are not relevant, he continued, “Then forget. No problem.”

Below is a video of the Dalai Lama's Ogden Lecture.

Reader Responses to Brown Brings the Dalai Lama to Providence