“We are an orchestra against ignorance.” That’s how Israeli conductor Daniel Barenboim describes the West-Eastern Divan, which consists of young musicians hailing from Israel and its Arab neighbors. Brown hosted the orchestra for a week in late January. 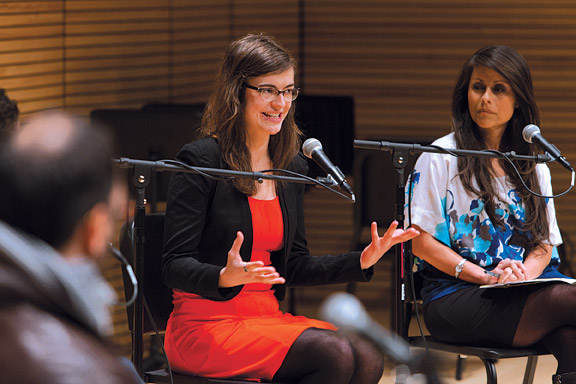 The musicians took part in painfully open conversations about the Middle East, and gave two extraordinary concerts of Beethoven symphonies at the Veterans Memorial Auditorium in downtown Providence. Then they headed to Carnegie Hall, where they wowed New York City audiences with the full Beethoven symphony cycle.

The Divan was founded in 1999 by Barenboim and the late Palestinian American literary scholar Edward Said, whose widow, Mariam Said, continues to support the orchestra. Central to the  Divan’s mission is a commitment to listening and understanding, a particularly thorny challenge for those from warring cultures and faiths. Still, the depth of that understanding was clear when the Divan played in Providence.

As the musicians watched and waited and then burst forth in response to one another, you could see as well as hear their closeness.
The concerts coincided with a series of events sponsored by the Cogut Center for the Humanities. In one, Israeli Miko Peled, author of The General’s Son: Journey of an Israeli in Palestine, warned his audience that his remarks would be “hard to listen to” and “decidedly one-sided.” Describing his shift from ardent patriot to critic of his homeland’s policies, Peled showed photographs of bombed-out Palestinian refugee camps and cramped tunnels, citing comparisons of the system to apartheid. The Jews’ right to return to their ancestral homeland in 1948 did not justify the expulsion of Palestinians living there, Peled argued. He described his mother’s horror when she was offered the home of an evicted Palestinian family. After a Palestinian suicide bomber killed his niece, he said, the media asked his sister against whom she wanted retaliation. No one, she answered; “We, the Israelis, brought these young men to this action.”

Palestinian Izzeldin Abuelaish—author of the memoir I Shall Not Hate: A Gaza Doctor’s Journey on the Road to Peace and Human Dignity—gave an equally complex and emotional response to the violence. He looked stricken as he told of losing his childhood to brutal poverty in the refugee camps, then losing his wife to leukemia, and finally losing three daughters and a niece when an Israeli tank shelled his home. Many would have sunk into rage or despair in his situation, but Abuelaish wanted to create hope from his daughters’ death.
“Education is the most powerful weapon,” he said, and so in their memory he established Daughters for Life, a foundation that provides scholarships for young women in the Middle East.

“We are blessed—or cursed—to live side by side or together. Not back-to-back,” Barenboim said, criticizing both Palestinians and Jews for their lack of curiosity about one another. “I have both an Israeli and a Palestinian passport, so I am in constant dialogue with myself,” he added.

Brown’s involvement with the Divan goes back to 2006, when Michael Steinberg, director of the Cogut Center, offered to host the orchestra on campus for four days. He and Barenboim, who are friends, had been trying to schedule a visit to Brown when war in Lebanon threw the Divan’s plans off track. The musicians were scheduled to perform in honor of Kofi Annan at the United Nations, but “they needed a place to refocus,” Steinberg says. “They needed to be at a university, not a conservatory.”

Brown’s interdisciplinary ethos and its strength in both the humanities and Middle East studies, he says, helped the orchestra make the connections they needed to make. After that visit, he began bringing groups of Brown students and faculty to work with the Divan in Berlin, Seville, and Nazareth.

The next step in Brown’s collaboration with the Divan will center on the founding of the Barenboim-Said Academy in Berlin, which is scheduled to open in 2015. The mayor of Berlin has given space for the school, and the state has pledged $27 million. Architect Frank Gehry is designing a concert hall. Brown faculty members are helping design the academy’s curriculum, a third of which will focus on the humanities, Steinberg says, and they will teach there as well. “It’s in the early planning stages,” he emphasizes. Still, he says, the academy will enroll students from Israel and its Arab neighbors, as well as from Brown.