Among the thousands of proud parents sitting expectantly on the College Green at Commencement on May 26 was Ben Affleck’s mom, Christine. “She never got to see me graduate,” the movie star and college dropout noted wryly after President Christina Paxson awarded him an honorary doctor of arts. The degree, which recognized his advocacy on behalf of eastern Congo as well as his two-Oscar film career, was one of 2,419 conferred at this year’s Commencement—President Paxson’s first and Brown’s 245th. See a full list of this year's honorary degree recipients here.) 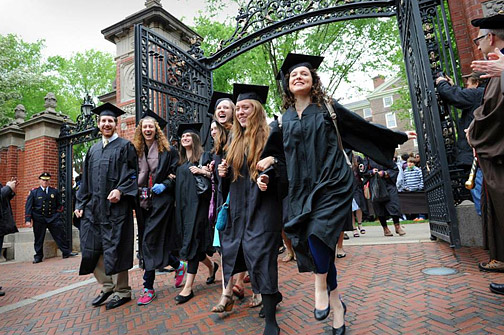 Frank Mullin
Sometimes you just have to skip. The class of 2013 exits the Van Wickle gates.
Sharing the stage with Affleck was a  different kind of celebrity, Nobel Laureate and longtime Brown physics professor Leon Cooper, whom the faculty awarded its highest honor, the Susan Colver Rosenberger medal.

The Baccalaureate address given this year by Tougaloo College president Beverly Wade Hogan, and the ceremonies on the Green, which included medical and graduate students as well as undergrads, capped a three-day celebration that began inauspiciously with a cold and soggy Campus Dance Friday night. Unfazed, alumni, students, and parents danced on and on, with the class of 2013 reveling in front of Sayles Hall at midnight for the traditional Senior Sing.

If the rain, which persisted on and off all day Saturday, had a benefit, it was that it prompted visitors to attend indoor events they might otherwise have missed. Forums and concerts were packed, and alumni lingered after parties, discussing kids and jobs, some musing about returning to Providence as empty nesters. On Saturday morning, President Christina Paxson, celebrating her first Commencement, hosted a Breakfast with the President for alumni and parents. Heejung Sarah Park ’13 and Marcos Aranda ’13 were also comissioned, respectively, in the U.S. Air Force and U.S. Army.

As if on cue, the skies cleared as the Van Wickle Gates swung open Sunday morning for the Commencement procession. Lined up along College Street, faculty, staff, and alumni saluted the real stars of the day: the class of 2013. As the graduates made their way to the First Baptist Church in America, their teachers applauded and shared boisterous high-fives with their now former students, sending them on to their futures with confidence and hope.

Below is a series of slide shows featuring everything from the formal Commencement events to alumni Field Day, Campus Dance, and the 25th and 50th reunions. Below them, are profiles of a few graduating seniors. You can also read more about:

• A forum by Harvard Divinity School professor Karen L. King’84 PhD, who last fall became an academic celebrity when she wrote about a fragment of papyrus that suggested Jesus may have been married.

• A panel of alumnae female comedians and comedy writers.

• A discussion of industrial robots and whether or not robots will eventually force more people to the unemployment line.

• A reunion of thirty-three students, staff, and faculty who thirty-five years ago climbed Devistan, India's second-highest mountain, as part of Modes of Thought course called Exploration.

• A forum about whether slavery is dead or continues in other parts of the world as well as in the legacy of the U.S. wealth gap and the high incarceration rate among African American men.

Images from the Commencement Procession

The skies cleared, and the parade wrought its annual magic, bringing the newest alumni face to face with their forebears. A slideshow.

The Baccalaureate
"You are among the most privileged people in the world," Tougaloo College president Beverly Wade Hogan tells the class of 2013, click on the photo or link for the slideshow.

Catching Up at Field Day
A slideshow of the Field Day barbecue. Alumni from the classes of '83 to '08 traded gossip, while their kids sang along with the music and made paper hats in the crafts tent.

The Class of 1988: 25th Reunion
A picture slideshow of the class of 1988's Reunion. They dined on Simmons Quad and danced till midnight at Funk Night in Sayles Hall.

The Class of 1963: 50th Reunion
A slideshow of the class of 1963's celebration- from the kickoff dinner on.

Dancin' in the Rain
Images of the Campus Dance 2013. As always, it culminated in the traditional Senior Sing on the steps of Sayles Hall.

Seniors: It's About More Than Grades
For many of this year's graduates, earning grades good enough to graduate isn't enough. Meet six who have put their learning into action. Among them: Andrew Kim, who equips South Sudan’s only medical school,  and Valerie Bondura, who unearthed the homeland of the Romanian people we still disparage as gypsies.