On the Trail of the Romá

In her large Atlanta high school Valerie Bondura felt understimulated and overlooked. When she announced to her parents that she wanted to travel, “They said you can go anywhere you like as long as you can pay for it,” Bondura says. She found a program, Davis United World College Scholars in Vermont, that brought students from multiple countries together at boarding schools around the world. Come the start of her senior year in high school, she was living in western Norway. “Extremely, extremely rural,” is how Bondura describes it. 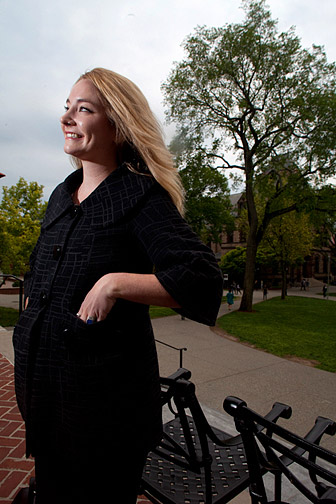 After high school, Bondura took a gap year in Paris and there too witnessed discrimination against Romá, who were blamed for all sorts of social ills. There was a movement to have them deported to Romania and Bulgaria, even though many had spent their whole lives in France.

At Brown, Bondura concentrated in archaeology and the ancient world and anthropology. It’s a cliché about the field that there’s no longer any place left to dig. “There is a general opinion that archaeology is past its prime,” says Bondura. “People wonder, ‘What else can you find in Greece or Rome?’”

But reading about the Romá, she came upon references to Feudum Acinganorum, a Romá settlement on the Greek island of Corfu dating back to the thirteenth century. As far as she could tell, no archaeologist had ever looked for it. With a grant from the Brown International Scholars Program, Bondura spent the summer researching Feudum Acinganorum, first at a library in Athens and then on the island itself. With no one to help or guide her, the research proved harder than she ever imagined.

“I could sit in a classroom and learn about settlement patterns and study maps and trench diagrams, but once I got out into the field, I was like, ‘How does anyone find anything in these places?’” Bondura says. “It was a huge wake-up call in a very good way.”

In her two weeks on Corfu, Bondura roughly mapped where she thought the settlement would have been. It had been assumed that the Romá were enslaved on the estate of a feudal lord, but Bondura believes they may actually have been self-governing. If she’s right, it gives the lie to the idea that Romá have always been wanderers, living in other peoples’ counties but never on their own.

Next fall, Bondura starts a PhD in archaeology at Columbia. She says she may return to Corfu—this time to start digging.

Reader Responses to On the Trail of the Romá