To give the audience an idea of just what female comics and comedy writers face in their profession, entertainment executive Lauren Corrao ’83 quoted Jerry Lewis: “A woman doing comedy doesn’t offend me but sets me back a bit,” Lewis said. “I, as a viewer, have trouble with it. I think of her as a producing machine that brings babies in the world.” 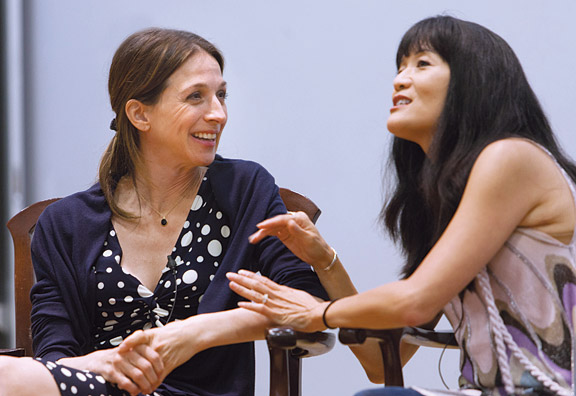 Scott Kingsley
Funny ladies Marin Hinkle '88 and Suzanne Whang '86.
Lewis made his statement in 1998, but the panelists at a Commencement forum, “A Sense of Humor: Brown Women in Comedy,” agreed that sexism still prevails in the business. Suzanne Whang ’86 ScM, a stand-up comedian and former host of the HGTV series House Hunters, said her physical appearance worked against her. “I’m a female Asian comedian with no boobs,” she said. Everyone thought, “I should not even have been working” in comedy.

Female comics use discrimination and gender bias for material, the panelists said. “Women get their release in comedy by rebelling against the norm,” said Tara Schuster ’08, who started out as an intern at Comedy Central’s The Daily Show and is now a producer at the network.

For Marin Hinkle ’88, who is best known for her role as ex-wife Judith Harper-Melnick on Two and a Half Men, cracking jokes was her way of rebelling against her strict parents, who wouldn’t allow her to invite boys home and didn’t tolerate swearing. She said she discovered she wanted to go into the funny business when, at Brown one year, doe-eyed and innocent, she received a book on male sexuality from her Secret Santa. Friends asked her to read a passage aloud. Whether everyone was laughing at her or with her didn’t matter. “I realized, ‘Oh wow, I love making people laugh,’” she said.