Think of them as tiny cars designed to carry medication to its precise destination. They can elude such barriers as skin and cell membranes, roadblocks that normally prevent drugs from getting to where they need to go. 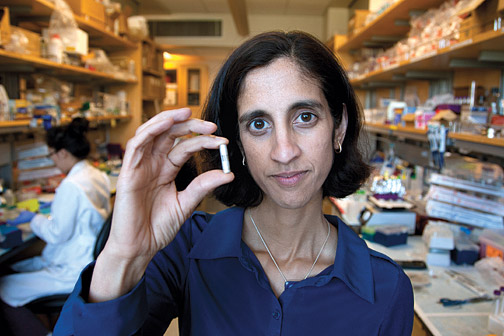 These “cars” are actually a form of nanotechnology that will deliver the medications of the future, and they are the focus of research conducted by Tejal Desai ’94. A professor of bioengineering and therapeutic sciences at UC San Francisco, she’s using microscopic material to develop more precise and accurate drug-delivery systems.

“This has been a problem for decades: how do you get drugs through the cell barriers?” Desai says. Success will mean delivering medication in a “more convenient, safer, more effective” way, she explains, by “increasing the effectiveness of medicine, getting it to the right place without side effects, being able to do that in a way that makes it easiest on the patient.”

Traditionally, the easiest way to get medication into the body has been by injection, but that’s not the best for patients, Desai says, because it can cause discomfort. And the medicinal effect can be inconsistent and transitory: with each injection, the drug’s concentration in the bloodstream spikes and then decreases.

Desai’s immediate focus is on an alternative method for delivering medication to treat ocular degeneration. Instead of the current treatment, an injection into the eyes once a month, “we’re designing a flexible, transparent film—like a contact lens—with small pores or channels in it that contain the drug,” she says. “It will deliver a steady rate of drug for six months.”

At Brown, Desai concentrated in biomedical engineering. She says she loved science and math and wanted a career in which she could both help people and be “at the forefront of innovation and change.” Active in the Third World Center, Desai worked as a peer counselor for women and students of color. Unfortunately, this also meant she would “stay up late and do all these things and not do my problem sets,” she says. “I really did not do very well my first year.”

It was the opportunity to conduct scientific research that motivated her academically. It “made the classwork more interesting,” Desai says. She worked with professor of medical science and engineering Edith Mathiowitz studying the role of polymers in drug-delivery systems.

In her lab at UCSF, Desai supervises about twenty post-docs and graduate students. Working on a scale of between twenty and 200 nanometers—about the size of a virus or protein—she and her team engineer these tiny medication-transport systems whose surfaces are dotted with what Desai calls “nanoprojections. They almost look like Velcro,” she says. “They grab onto the cell surface. That interaction causes the cells to open up their tight junctions and allow the drugs to get through.”

Right now the lab is partnering with several pharmaceutical companies and has spawned a number of startups. Desai founded two of the startups: Zordera , which focuses on ophthalmologic drug delivery, and Cell Habitats, which focuses on tissue regeneration. “In the simplest terms,” says Desai, “we’re trying to deliver medicine in a better way.”

Reader Responses to A Better Way