It may be the first legal method of laundering money. 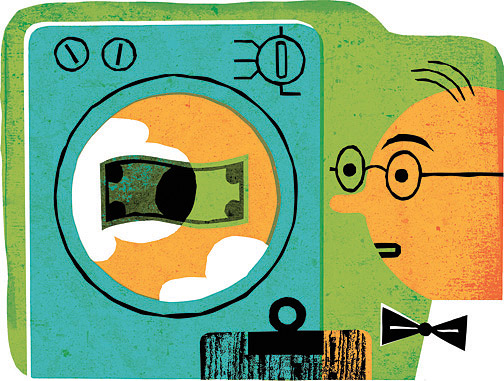 Don’t worry, the system devised by engineering and physics professor Nabil Lawandy doesn’t make illegitimately earned money legit. Lawandy wants to take those greasy old bills in your wallet—the ones your mother told you never to put in your mouth because you don’t know where they’ve been—and return them to a condition that’s almost like new.

Why? It seems that, each year, central banks in many countries throw out around 150 billion bills because they’ve become too filthy to remain in circulation. All that handling by human hands means they get coated with sebum, an oily, waxy substance that is secreted by the sebaceous glands in our skin. When the sebum oxidizes, the bills yellow, and the money looks and feels gross.

The Federal Reserve alone replaces between seven and eleven billion banknotes a year, and the cost is substantial—around $65 for every 1,000 bills. And then there’s the matter of disposal, which adds 150,000 tons of (nontoxic) shredded paper to landfills around the world.

In an experiment, Lawandy built a rectangular sealed aluminum chamber and, inside it, stacked bills sullied with either motor oil or a simulation of human sebum made mostly from beef tallow. The money was then rinsed in the supercritical CO2, which is commonly used in dry cleaning. (Supercritical CO2 is formed when gas is exposed to increased pressure and higher temperature so that it behaves more like a liquid than a gas.) The bills emerged brighter and almost sebum-free. None of the security features built into the bills to prevent counterfeiting were affected.

“We have shown that supercritical CO2 is an effective cleaning process,” Lawandy and his co-author wrote in a paper published in January in the journal Industrial & Engineering Chemistry Research. “Superfluid cleaning is critical and can have dramatic consequences for central bank budgets.”

The next step? Seeing if the process can be used on a much larger scale to clean over a hundred thousand bills at a time.

Lawandy performed the research with a colleague at the Providence-based Spectra Systems Corporation, where he is the CEO. The company specializes in banknote processing and the authentication of money.