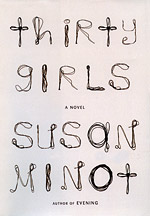 Thirty Girls by Susan Minot ’78 (Knopf).
In October 1996, 139 girls are abducted from a Catholic school in northern Uganda by rebel leader Joseph Kony’s Lord’s Resistance Army. One of the nuns tracks the rebels and persuades them to release all but thirty of the girls. In clear and nuanced prose, Minot tells the story of Esther Akello, one of the girls left behind, and of the violence she is forced to endure and commit. A second thread follows an American journalist who meets Esther at a Ugandan rehabilitation center. A vivid and persuasive read infused with hard questions.

Ping-Pong Diplomacy: The Secret History Behind the Game That Changed the World by Nicholas Griffin ’93 (Scribner).
You’ve no doubt picked up a paddle in a basement and maybe even played a version that begins with the word beer, but Ping Pong, it turns out, has a strange history. Griffin charts the game’s course from English after-dinner entertainment through its diplomatic role in China, where it paved the way for Nixon’s 1972 visit. Among the cast of hippies and generals, British nobleman Ivor Montagu stands out: son of a British baron, he invented the official rules in the 1920s and became a Soviet spy before helping export the game to Asia. A surprising and suspenseful saga.

It’s Complicated: The Social Lives of Networked Teens by danah boyd ’00 (Yale).
Just mention teens and technology, and the alarms will go off for many parents. But, after years of interviewing, boyd reports that teens are more concerned about friendships than gadgets and, given their highly structured lives, social media can be a lifeline. Basically, the kids are all right.

For the Love of Baseball: A Celebration of the Game that Connects Us All edited by Andrew Blauner ’86 and Lee Gutkind (Skyhorse).

The Promise of a Pencil: How an Ordinary Person Can Create Extraordinary Change by Adam Braun ’06 (Scribner).

The Ecology of Spirituality: Meanings, Virtues, and Practices in a Post-Religious Age by Lucy Bregman ’66 (Baylor).

The Forms of the Affects by Eugenie Brinkema ’10 PhD (Duke).

Slice of Life: A Food Writer Cooks Through Many a Conundrum by Leah Eskin ’84 (Running Press).

The Blind Masseuse: A Traveler’s Memoir from Costa Rica to Cambodia by Alden Jones ’94 (Wisconsin).

Autism Breakthrough: The Groundbreaking Method That Has Helped Families All Over the World by Raun K. Kaufman ’95 (St Martin's).

New Labor in New York: Precarious Workers and the Future of the Labor Movement edited by Ruth Milkman ’75 and Ed Ott (Cornell).

At the Crossroad: An Astrologer Looks at These Turbulent Times by Jessica Murray ’73 (MotherSky).

Claremont Boy: My New Hampshire Roots and the Gift of Memory by Joseph D. Steinfield ’61 (Bauhan).

Thanks for the Feedback: The Science and Art of Receiving Feedback Well by Douglas Stone ’80 and Sheila Heen (Viking).

The Painting of My Life by Ricker Winsor ’67 (Mud Flat).

The Russian Embassy Party: A Novel by Cliff Adelman ’64 (Archway).

Dinner with Stalin and Other Stories by David Shrayer-Petrov; edited by Maxim D. Shrayer ’89 (Syracuse).

For My Father by Amira Thoron ’92 (Pleasure Boat Studio).

The Government of Nature by Aafa Michael Weaver ’87 AM (Pittsburgh).

Breathing Race into the Machine: The Surprising Career of the Spirometer from Plantation to Genetics by Lundy Braun (Minnesota).

How The Bible Became Holy by Michael L. Satlow (Yale).

The Brunist Day of Wrath by Robert Coover (DZanc).