End of the World

The Brunist Day of Wrath by Robert Coover (Dzanc). 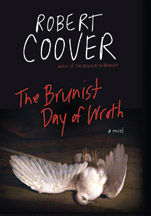 A stolen cache of dynamite. A web of interconnected betrayals, civic and domestic. A prophetic ghost recording. (“Was the spirit of the dead girl really trying to reach them? It’s possible.”) In The Brunist Day of Wrath, the sequel to his 1966 The Origin of the Brunists, novelist and longtime Brown literary arts professor Robert Coover is on a suspense plateau.

Interpreting that haunted tape, a slick evangelist tells members of a schismatic cult called the Brunists to prepare for the rapture on the Mount of Redemption, site of a past coal-mining tragedy that defines the town of West Condon and continues to breed its lunacies. Protestants, Catholics, and cultists go into “their Hatfields and McCoys mode,” and Coover lets them dismember, decapitate, and blow each other to bits in loving detail.

But this is a moral society, and painstaking attention is paid to reassembling all the parts. Come down off the holy hill and West Condon is a character both personal and universal. You shall know it by the Eagle social club, the Sir Loin steak house, the Nineteenth Hole, the Blue Moon, and a host of sordid watering holes.

Coover’s former students may hear echoes: “Won’t be easy, but you may be further along than you think,” a writing mentor tells Sally Elliott, the Brunists’ boyish-hot ethnographer, who manages to crawl out the Apocalypse’s other side and turn the novel into a novel.

Don’t believe in Judgment Day? Jesus (yes, That One) tells a fresh arrival: “But the end of the world, Mr. Jenkins, is not an event. It is a kind of knowledge. And therefore, at least for those in the know, it has already happened.”

Is something terrible or something funny happening to America? If you’re somewhere on this continuum, there are three essential books of Revelations you’ll need to survive, physically and mentally, to mid-century: Stephen King’s The Stand, Cormac McCarthy’s The Road, and The Brunist Day of Wrath. Of Coover’s dozen, you’ve gotten drunk on one or two. The Origin of the Brunists won the William Faulkner Award; The Public Burning drew comparisons to Melville, Twain, and Whitman. But The Brunist Day of Wrath is what we’ve been waiting for (verse-spouting Willie Hall bursts in: “Thou hast kept the good wine until now!”): the greatest.

Reader Responses to End of the World