The 250th anniversary of Brown’s founding provides an exceptional opportunity to reflect on transformative moments that have shaped our University’s distinctive history. Among these is the cooperative agreement that Brown entered into with Mississippi’s Tougaloo College in May 1964. 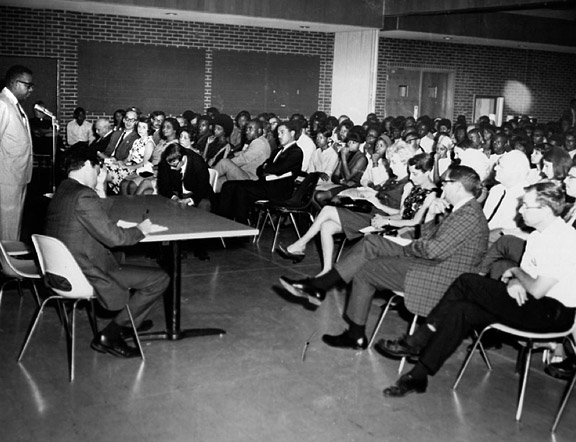 Tougaloo Archives
NAACP leader Aaron Henry, standing at left, leads a seminar in Warren Hall at Tougaloo College in the early 1970's. The lectures focused on topics of race, culture, politics, and economic issues during the Mississippi Freedom Movement.
Last month I had the privilege of visiting Tougaloo for the first time, fifty years after the forging of this extraordinary agreement. Tougaloo’s president, Beverly Hogan, and I signed a formal proclamation recommitting to our partnership. I was honored to serve as the Commencement speaker, which allowed me both to shake hands with Tougaloo’s 121 graduates and to share my thoughts on the past and future of this institutional relationship. It may seem unlikely that a historically black college in Jackson, Mississippi, and a Northeastern Ivy League university would become partners amid the civil rights movement. What joined these seemingly different institutions, however, are the values that permeate the character and culture of each: freedom of conscience, liberty of thought, and a commitment to justice and service to society. These core principles were as evident during my recent visit as they no doubt were to President Barnaby Keeney at the time of the original agreement.

In the early 1960s, Tougaloo was at the forefront of the civil rights movement. Its faculty and students staged the first sit-ins in Mississippi, and the college fearlessly opened its doors to such agents of change as Medgar Evers, Dr. Martin Luther King Jr., and Fannie Lou Hamer. As a result, Tougaloo became a political target, which weakened it financially. The State of Mississippi even threatened to withdraw its charter, putting the college’s very existence at risk. Two members of Tougaloo’s board, Providence residents Irving J. Fain and Lawrence L. Durgin, joined forces with Brown’s chaplain, Charlie Baldwin, to support the college. Thanks to their efforts, in 1964 Brown and Tougaloo signed their “cooperative agreement” with financial support from the Rockefeller and Ford foundations.

During my visit to Tougaloo, I was struck by the wisdom of the members of the Brown community who saw the value in this agreement. The college is a beautiful and inspiring place. Many alumni from the class of 1964 came to the 2014 Commencement, applauding the entrance of the college’s newest graduates into a world that has altered significantly since their own graduations fifty years earlier. These alumni were among the early leaders to instigate change, to address the glaring injustices they witnessed during their undergraduate years. The presence of these alumni was a clear reminder that, while much progress has been made, today’s Tougaloo and Brown graduates have an obligation to tackle the thorny challenges that remain despite the success of the civil rights movement.

Over the past fifty years, the cooperative agreement between Brown and Tougaloo has yielded hundreds of student exchanges. There have been research collaborations, professional development opportunities, and special projects and programs. Through the Early Identification Program, Brown has admitted more than eighty Tougaloo graduates into its medical school and, in recent years, others into its PhD programs. Over the past four years alone, thirty Brown students have benefited from spring break trips to Tougaloo to study the history of the civil rights movement. Most recently, Brown’s partnership has also enabled nineteen exceptional Tougaloo science students to become members of the Sigma Xi honor society under an affiliation agreement with Brown’s chapter.

We live in a time when American universities are establishing relationships and collaborations with colleges and universities all over the world. Brown is no exception. We have thriving educational and research partnerships with universities around the globe and recently announced a new joint MBA program with the Instituto de Empresa in Madrid. However, compared to our Tougaloo partnership, our international collaborations are relatively new. My visit to Tougaloo helped me appreciate the elements that make for such long-lived partnerships: a shared sense of mission and purpose, a commitment to making the collaboration work despite the inevitable frictions, and the existence of mutual benefits that accrue to both institutions. I know that the Tougaloo agreement has been enormously beneficial to Brown. This partnership, hailed as a model by many upon its creation, has helped Brown live up to its own ideals.