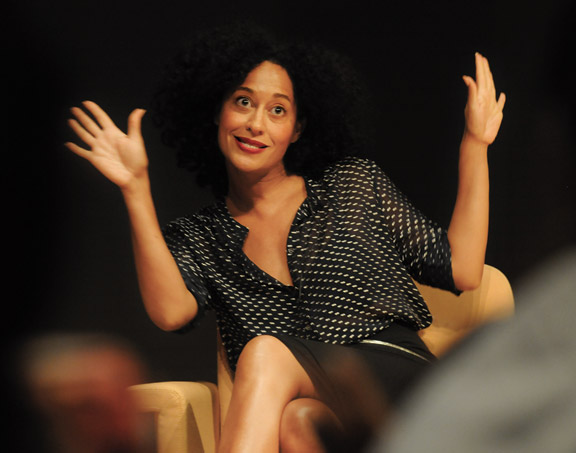 Revving up for her new ABC show, Black-ish, which premieres this fall, Tracee sat down in a Commencement forum with Brown professor Tricia Rose ’87 AM, ’93 PhD, the director of the Center for the Study of Race and Ethnicity in America, to discuss the intersection of her identity as a woman of color and her expansive career in the entertainment industry. Launched into success in the early 2000s with her hit show, Girlfriends, Ross names her 176-episode run on the show as her entry point into both the world of comedy and an exploration of how Black women “own their sexuality without exploiting it.”

A queen on various forms of social media—Instagram, Twitter, and Facebook—Ross chatted with Rose about how she grappled with the idea that sharing images of herself publicly was not a “commodification” of her life but more of a strong display of ownership over her own body. She shared popular print media images with the audience that highlighted some of the stereotypically “black” physical features, such as her hair or her curves, that originally made her uncomfortable but now have become public evidence of her power over her own sexuality.

Ross views prominent female entertainers as role models for both her comic career and her image: “I saw Lucille Ball, and my world opened up. I saw Jennifer Lopez, and my ass opened up—metaphorically, of course.” Ross’s mother is legendary singer Diana Ross, whom the actress credited as being a supportive, caring figure. Tracee Ross then talked about her new show, Blackish, as a comedic observation of how a black upper-middle-class family struggles to maintain its cultural identity within a suburban white neighborhood—yet another example of how she has helped launch a dialogue about race not usually heard on TV.