Although George Borts, the George S. and Nancy B. Parker Professor Emeritus of Economics who died on May 2, earned his PhD at the University of Chicago, which has more Nobel laureates in economics than any other university, his greatest influence may have been as a teacher and adviser. He continued teaching undergraduate courses on international finance and the American welfare state even after he retired in 2013. 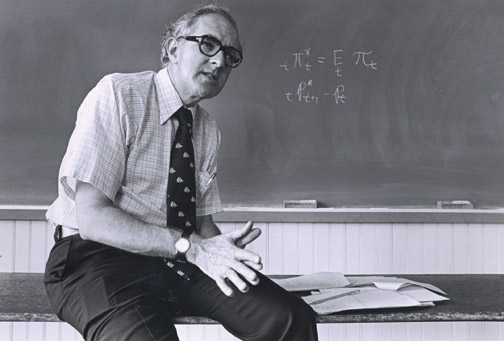 Brown Archives
George Bort's teaching influenced many, including Fed Chair Janet Yellen '67.
“Generations of Brown students, whether economics concentrators or not, discovered the creative intellectual applications of the field through his classes, and a long list of doctoral students prospered under his mentorship,” President Christina Paxson wrote in an e-mail to the Brown community.

“I had the great pleasure while at Brown to have had George Borts as my teacher,” chair of the Federal Reserve board of governors Janet Yellen ’67 wrote the BAM shortly after his death, “and I owe a great deal of my subsequent career to him. I took two courses from George: one on international finance, and another on advanced macroeconomics. These two subjects became central to my career in research and in central banking, and George kindled my interest in both. Four years later, at Yale, George’s teachings became the basis for my own thesis, Employment, Output and Capital Accumulation in an Open Economy. And then later, and not as a coincidence, when I started teaching, George’s two areas of interest, international finance and macroeconomics, became my own areas of teaching and research as well. George was both an inspired and an inspirational teacher, and what he taught me some forty years ago has stayed with me, deeply, for life.  I have always been grateful for all that he so generously gave me, through his passion for economics and his personal kindness.”

Born in 1927 in New York City, Borts earned his undergraduate degree at Columbia and in 1953 received his PhD from Chicago, where he studied under Milton Friedman and Arnold Zellner. He first joined the Brown economics department as an assistant professor in 1950, introducing the Chicago econometric approach to the University. Borts matured as a professor at a time when economists could still range widely, and Borts, known for his humility and sense of humor, soon gained a reputation as an economist with a knack for applying theory to the real world. “Professor Borts’s class was really distinguished in that respect,” his former student Marvin Goodfriend ’77 PhD told the Brown Daily Herald. “His material was so applicable and practical, even though there was a substantive theoretical underpinning.”

During his career, Borts chaired the economics department and served as the American Economic Review’s managing editor. He was a visiting professor and research fellow at Hokkaido University, the London School of Economics, and the National Bureau of Economic Research.

As his former student Elizabeth Fuerbacher ’17 told the BDH: “He was exactly what a professor should be.”

Reader Responses to The Perfect Professor