By now, everyone knows that too much carbon dioxide in the atmosphere contributes to global warming. As the levels of CO2 continue to rise worldwide, some researchers wonder if we could put it to better use. 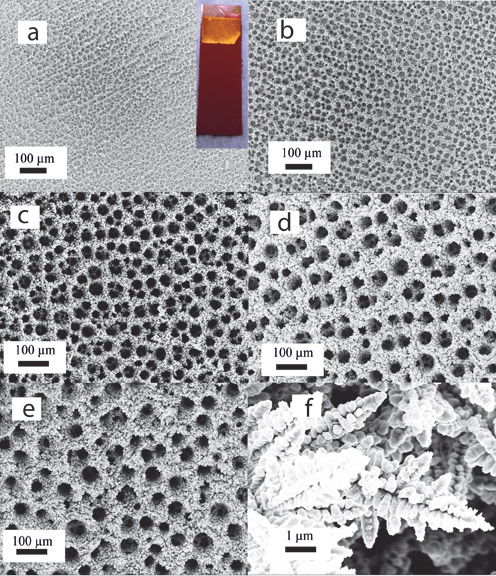 One approach is to capture the CO2 emitted from power plants and other facilities and use it to make industrial chemicals, most of which are now made from fossil fuels. The problem is that CO2 is extremely stable, and reducing it to a reactive and useful carbon source isn’t easy.

In a report titled “Electrochemical Reduction of CO2 at Copper Nanofoams,” published in the journal ACS Catalysis, Professor of Engineering Tayhas Palmore described research done by graduate students Sujat Sen and Dan Liu, who found a way to activate CO2 using a new form of copper—copper foam. The research showed that the foam’s surface, full of channels and pores, changes the way copper reacts with CO2  molecules.

"Copper has been studied for a long time as an electrocatalyst for CO2 reduction,” Palmore says, “and it’s the only metal shown to be able to reduce CO2 to useful hydrocarbons. There was some indication that, if you roughen the surface of planar copper, it would create more active sites for reactions with CO2.”

The research showed that copper foam catalysts produce an entirely different set of reaction products compared to planar copper. The results suggest that copper foam could be a new and unexplored way to reduce CO2.

The work is part of a larger effort by Brown’s Center for the Capture and Conversion of CO2. The Center, funded by the National Science Foundation, explores a variety of catalysts that can convert CO2 into usable forms of carbon.

“The goal is to find ways to produce some of the world’s largest-volume chemicals from a sustainable carbon source that the Earth not only has in excess but urgently needs to reduce,” says Palmore, who leads the Center. “This is a way for us as scientists to begin thinking of how we produce industrial chemicals in more sustainable ways and control costs at the same time. The cost of commodity chemicals is going nowhere but up as long as production is dependent on fossil fuels.”
What do you think?
See what other readers are saying about this article and add your voice.

Reader Responses to Lemonade from Lemons