Remember deciphering Romeo and Juliet in ninth grade—silently, alone, in a paperback edition riddled with footnotes that made it almost impossible to follow the plot? 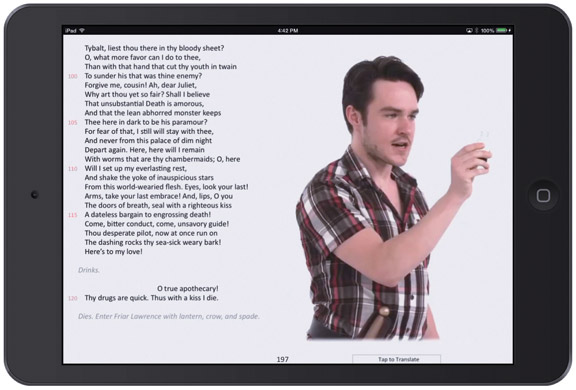 Courtesy Wordplay
Drew Ledbetter is Romeo in the WordPlay app hoping to introduce Shakespear to the iPad generation.
A group of alums wants to change all that. “It’s literature and poetry, but it’s meant to be performed out loud and acted,” says Drew Ledbetter, who earned his MFA from the Brown/Trinity Rep acting program in 2013.

Ledbetter is one of several Brown/Trinity Rep MFA grads acting in a study aid called WordPlay, which allows students to read the plays on their tablets or online while watching the actors’ dialogue on the same screen. Readers can stop the action or jump among scenes as they make their way through Shakespeare’s texts. As Romeo, Ledbetter may be the face that many kids will long associate with that character. (“I can’t even think about that,” he says with a mortified laugh.) WordPlay’s publisher, New Book Press, has thus far produced Macbeth and A Midsummer Night’s Dream, in addition to Romeo and Juliet.

The WordPlay performances are stripped-down, no-frills productions designed to “help kids understand the kind of art it’s supposed to be, to help them understand the context of this work,” Ledbetter says. “It’s for the common man. It’s meant to be fun.”

In Romeo and Juliet, Ledbetter’s former classmate Leicester Landon ’13 MFA plays Romeo’s friend and cousin, Benvolio. “We did a lot of Shakespeare in the MFA program,” Landon says. “But the really interesting thing about the WordPlay project was how it straddled the line between film and stage.” Paring the play down to its bare bones was challenging, he says: “Finding simplicity, minimalism in acting, just telling the story, just using the language—it was hard.”

Landon says he first acted in Shakespeare plays “when I was really young, in summer camp” in his native Louisiana. “The ways Shakespeare touched me at that time were really important,” he says. “I’m really glad we can bring it to people of that same age. It’s nice to pay it forward that way. You’re so cynical when you’re young, but here we’re saying love exists and poetry and magic can happen.”

Landon auditioned for the role via Skype, and through the play he met assistant director Debbie Goodstein ’84 and choreographer Birgitta Victorson ’07 MFA. Victorson says meeting Brown/Trinity graduates she didn’t already know confirmed for her “how big the program has gotten, and how successful. I thought, ‘Wow, they are really putting out good actors!’”

The series’ impact need not be limited to young people, says Alexander Parker, CEO of New Book Press. “It’s stunning how many adults have said to me in almost identical words, ‘I wish I’d had this when I was in high school!’”
What do you think?
See what other readers are saying about this article and add your voice.

Reader Responses to The iPad Bard