Around the time when Alexander Graham Bell was inventing his telephone, Brown professors Eli Whitney Blake and John Peirce and their students were working on their own prototype. 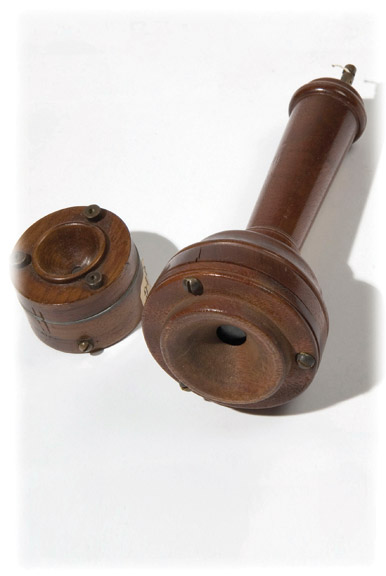 Completed in 1877, a year after Bell received a patent for his phone, theirs featured a receiver that was lighter and sleeker than Bell’s bulky ten-pound version. It also employed a straight magnet while Bell’s was horseshoe-shaped. Bell soon started using a straight magnet in his invention, and the lean shape of the receiver that became commonplace was derived from the Blake-Peirce model.

Blake, a physicist, first demonstrated his invention at his home on Williams Street just south of the campus. He and his assistants strung wire between two receivers, one in the house’s reception room and the other in the study down the hallway. Blake was shocked to hear words come out of his receiver. An observer later wrote, “Not even in their wildest flights of fancy had the scientists dreamed of the possibility of recognizing individual voices.

As for Bell, he was at first annoyed to hear about the Brown scientists’ work, but they assured him it was for scientific, not commercial, purposes. Of course, Bell had no problem borrowing from their research, as well as the research of others.

Over the next decade, Bell’s patent faced 587 legal challenges.

Photograph from the Brown Archives.