In 1984, when I was program director of WBRU, a man walked into my office, stuck out his hand and said in a very recognizable voice, “Excuse me, miss. I’m James Brown.” 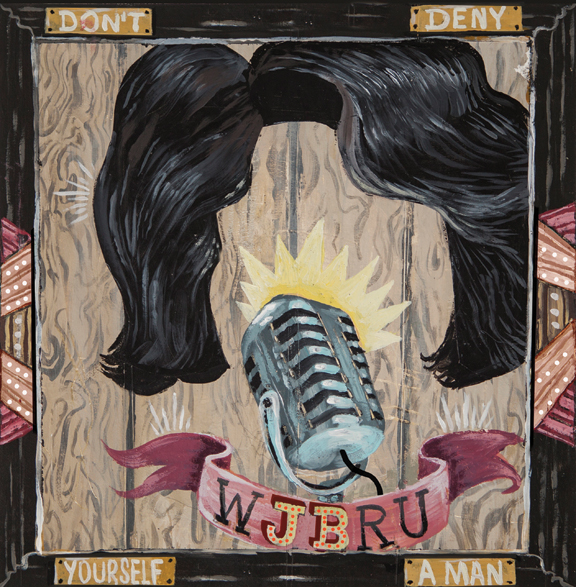 This was during a serious low point in the Godfather of Soul’s career. He hadn’t yet had his comeback with the hit single “Living in America,” and no rap artist had yet sampled a James Brown song. I knew he was performing that night at Alumnae Hall, but I never expected him to walk right into my office like that.

Mr. Brown explained that he needed to rent a tuxedo, get some lunch, and find his way to sound-check. I immediately placed a call to order the tuxedo of his choice—lime green—and walked him up to the control booth for a live interview. When I introduced him to the mostly female WBRU staff, he said, “I was planning on doing ‘This Is a Man’s World,’ tonight, but I think I just changed my mind.”

Once Mr. Brown was in front of a live microphone in the control booth, he talked nonstop. My good friend Stephen Hill ’84 arrived and showed him a T-shirt he’d printed with the Brown logo reworked to say James Brown University.

Next we decided to go to Oliver’s on Brook Street. Only then did Mr. Brown mention that his manager and his girlfriend had been sitting outside in the car the entire time. He told them they could sit at their own table at Oliver’s, on the other side of the restaurant. Meanwhile, he sat with Stephen and me.

As I write this, I’m referring to James Brown in the manner he insisted on later in life: “Mr. Brown.” But back then, I spent the whole afternoon calling him James, and he didn’t seem to mind. He asked if I would drive him to the sound-check in my car, allowing us a few minutes alone. Before I dropped him off, he said, “You know, Patti, I’ve got just one question for you. Do you ever want to get married and have babies, or are you gonna be a career woman your whole life?”

I had to pause before responding. It was an honest question, and we’d gotten chummy enough that I wanted to answer him respectfully. “Well, James. I guess I was kind of hoping that I could do both.”

“Maybe you can.… Maybe you can,” he mused. “Because I’ve been watching you all day, and I know that no man could ever hold you down. But let me tell you one thing.”

More than twenty years later, when I was working in the entertainment industry, I was re-introduced to Mr. Brown backstage after his concert in London. I recounted our day together, and reminded him of his words.

He nodded his head. “That’s my advice,” he said. “I gave that same advice to my own daughter.”

Patti Galluzzi, a former senior vice president of Music and Talent at MTV, lives in New York City with her two children.

Reader Responses to Excuse Me, Miss.