From her first dance with Harrison Ford to that time she whacked Jim Carrey with a piñata bat, pretty much everyone with a TV screen—or even a modem—has probably seen Marceline Hugot ’82 over the last twenty-five years. 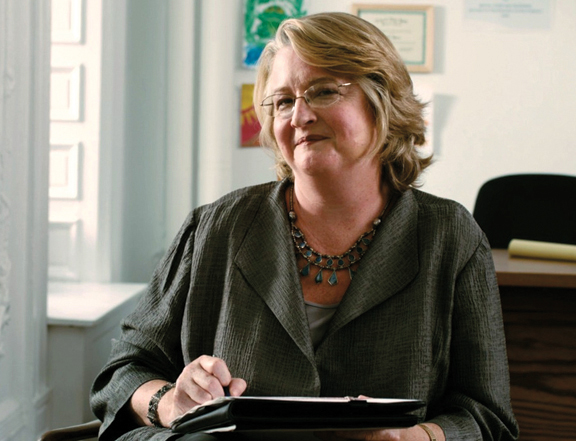 Whether they’ve actually heard her speak is another story.

In a strange coincidence, the two best-known recurring roles for Hugot—a veteran character actor who’s appeared in some eighty-five films since Ford cut in to dance with her in 1988’s Working Girl—were women who rarely uttered a word. After a long run of appearances as the infantile, toy-car-chewing Kathy Geiss on NBC’s 30 Rock, Hugot was featured last year on HBO’s apocalyptic The Leftovers as Gladys, part of a mysterious cult whose members took vows of silence.

“Those characters choose to have a full life as if they were speaking,” says Hugot, who not only has the power of speech, but is quite eloquent in reflecting on an acting life refracted through brief, memorable glimpses of well-sculpted characters. Indeed, Hugot seems to relish the challenge of leaving an impression without words, or in an appearance lasting just a few seconds. For example, it was her inspiration on audition day to flatten her hair into the weird arrangement that helped define Geiss, the über-quirky daughter of 30 Rock’s fictional GE CEO.

“I’m the queen of the cameos,” Hugot says, noting that over the years she’s moved away from the theater scene in New York City, where she played some substantial roles, and more into film and, most recently, TV work. “I understand the youth culture and the beauty culture,” Hugot adds, explaining that even in her twenties she looked older than her years. “It was clear I was not a leading lady, literally or mentally.

Still, her acting abilities turned heads while she was still young. A dual citizen who grew up part-time in France and part-time in Rhode Island, where her father, Francois Hugot, was a Brown professor of French studies, Hugot initially had no interest in going to college so close to home. She changed her mind after meeting legendary theater professor James O. Barnhill at a high school competition where she presented a one-act play. On College Hill, Hugot threw her energy into the stage—acting in Shakespeare’s Henry IV as a freshman, in Chekhov’s The Seagull, and directing a production of Genet’s The Maids.

After heading west to San Diego for a master’s in theater and landing her bit role in Working Girl, she played Mia Farrow’s maid in Woody Allen’s 1990 film, Alice. Hugot was a doomed passenger on United 93 and just last year whacked Carrey in The Incredible Burt Wonderstone, but it wasn’t until the zaniness of Geiss that folks on the street began to recognize her. Increasingly, television is her favorite medium, Hugot says, because “TV is in a golden age.”

Viewers this spring can catch Hugot in Flesh and Bone on the Starz network. Hugot does speak in her role, but the French-American does so in a rich British accent. Newfound fans still won’t know how her natural voice sounds.

Reader Responses to Seen, Not Heard