Standing between the John Carter Brown Library and Sayles Hall on the College Green, Wilson Hall has often seemed like the poor cousin of its neighbors. Lacking the portraiture and historic organ of Sayles or the intellectual cachet of the JCB, Wilson is known among students mostly for its conveniently located shabby classrooms. 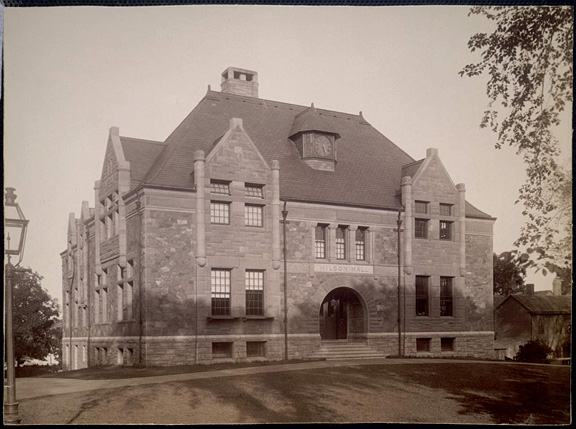 Brown Archive
Wilson Hall as it appeared soon after it opened in 1891.

Wilson Hall was built with $100,000 left to Brown in 1887 by George Francis Wilson, who, along with a Harvard chemistry professor, ran the Rumford Chemical Works, whose products included the Rumford baking powder that’s still used in so many kitchens today. (The area around the chemical works eventually became Rumford, Rhode Island.) Opened in 1891, Wilson Hall housed the physics department until it moved to the newly built Barus and Holley in 1965. Since then, it has held classrooms and meeting rooms.

“If you visit Wilson Hall during the exchange of classes, so many people are pouring in and out that it can be difficult to even get into the building,” Dean of the College Maud Mandel recently observed.

Now, thanks to a $24 million gift from the Richard A. and Susan P. Friedman Family Foundation, Wilson Hall may be transformed from one of Brown’s grimmest classroom buildings to one of its most modern. While preserving the ashlar sandstone and brownstone trim of the building’s exterior, the interior of Wilson will receive a complete overhaul beginning in June and ending by the 2018 fall semester. Its new three-floor configuration will include seven new classrooms, the latest learning technology, a common area where students can assemble, and two entryways that will create new pathways to the Green and the Simmons Quad. The building will be fully accessible to people with disabilities, and the gift includes an endowment for keeping the building up to date.

“This generous gift from the Friedman family,” President Christina Paxson noted in the same press release, “will transform a venerable building into a modern, accessible teaching and learning space that will serve undergraduates for generations to come.”

As for George Francis Wilson, all is not lost. His bequest to Brown allowed the option of either erecting a building named Wilson Hall or endowing a Wilson Professorship. The University will now establish this professorship and will put up a plaque on Friedman Hall recognizing Wilson’s role in Brown history—a pretty good leavening of his original hundred grand.