He’s been Secretary of Labor. He’s the current chair of the Democratic National Committee. Now he’s also at the Watson Institute, where he settled in this fall as a senior fellow. 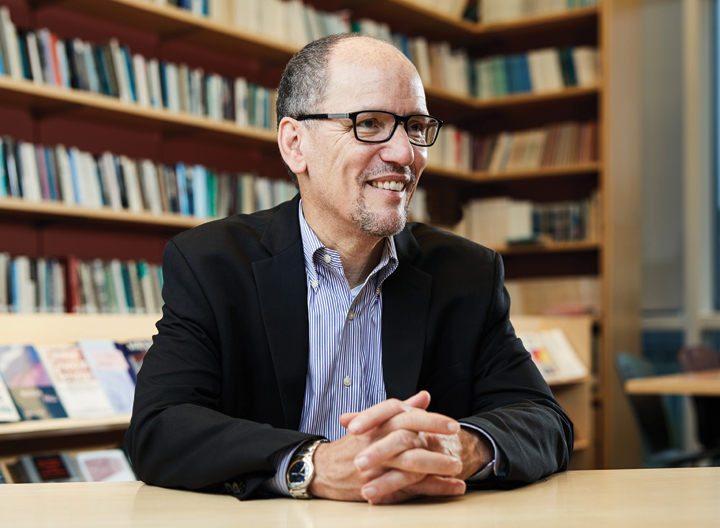 Rythum Vinoben
Tom Perez '83 is a senior fellow at the Watson Institute, and current chair of the Democratic National Committee.

What was your time at Brown like as an undergraduate?
I was a Pell grant kid who worked at the Ratty. My senior year, a professor helped me get involved with the Rhode Island Commission for Human Rights, where I got to be a staff investigator. That work gave me an exposure to injustice—it made me figure out I wanted to do something in the world of civil rights.

Why did you decide to move from D.C. to Brown?
Millennials are going to be the largest voting bloc in the next election cycle and beyond, and the class I teach is almost a focus group for me to learn what they’re thinking. But one of my goals is to encourage students to get involved in public service. In today’s chaotic universe, where consensus is elusive and Washington feels fundamentally broken, there is a fear that the next generation will throw up their arms and give up on public service. My number-one goal here is to work to persuade students to do just the opposite.

Tell us about your class at Brown.
It’s a non-credit course at the Watson Institute, entitled Governance and Leadership in Challenging Times, and the purpose is to give people exposure to how things really get done. We look at case studies of policy issues that came up and how we handled them—what we did right, what we did wrong, and what we learned. I also want to give students exposure to problem solvers. So far, they’ve heard from [RI governor] Gina Raimondo, [Providence] Mayor Jorge Elorza, and [former White House Chief-of-Staff] Denis McDonough. They will also be hearing from Michael Steele, former chair of the Republican National Committee, because my goal is to also hopefully model for students that a Republican is not your enemy—or if you are a Republican, that a Democrat is not your enemy. Michael Steele and I have pretty serious disagreements on a lot of issues but maintain a mutual respect for each other and a desire to always seek common ground where it can be found. I don’t want people leaving Brown thinking that the only way I can succeed is to demonize my foe.

What do you see as the best way to respond to Trumpism?
By winning elections like we did in this past cycle. I think the elections are the repudiation of the politics of division, of name-calling, and of conduct that’s unbecoming of not just a president but anybody holding public office. People want leaders who are uniters, that they can be proud of. I think people are just fed up with Twitter tantrums.

Have you been spending time with students outside your class?
I’ve been doing a lot of events with students—dinners, lunches, even podcasts. I can tell you they’re a lot smarter than I was at their age. I’ve been impressed by their remarkable intellectual curiosity and resolve to play a meaningful role in the construction of a better world and a better America.