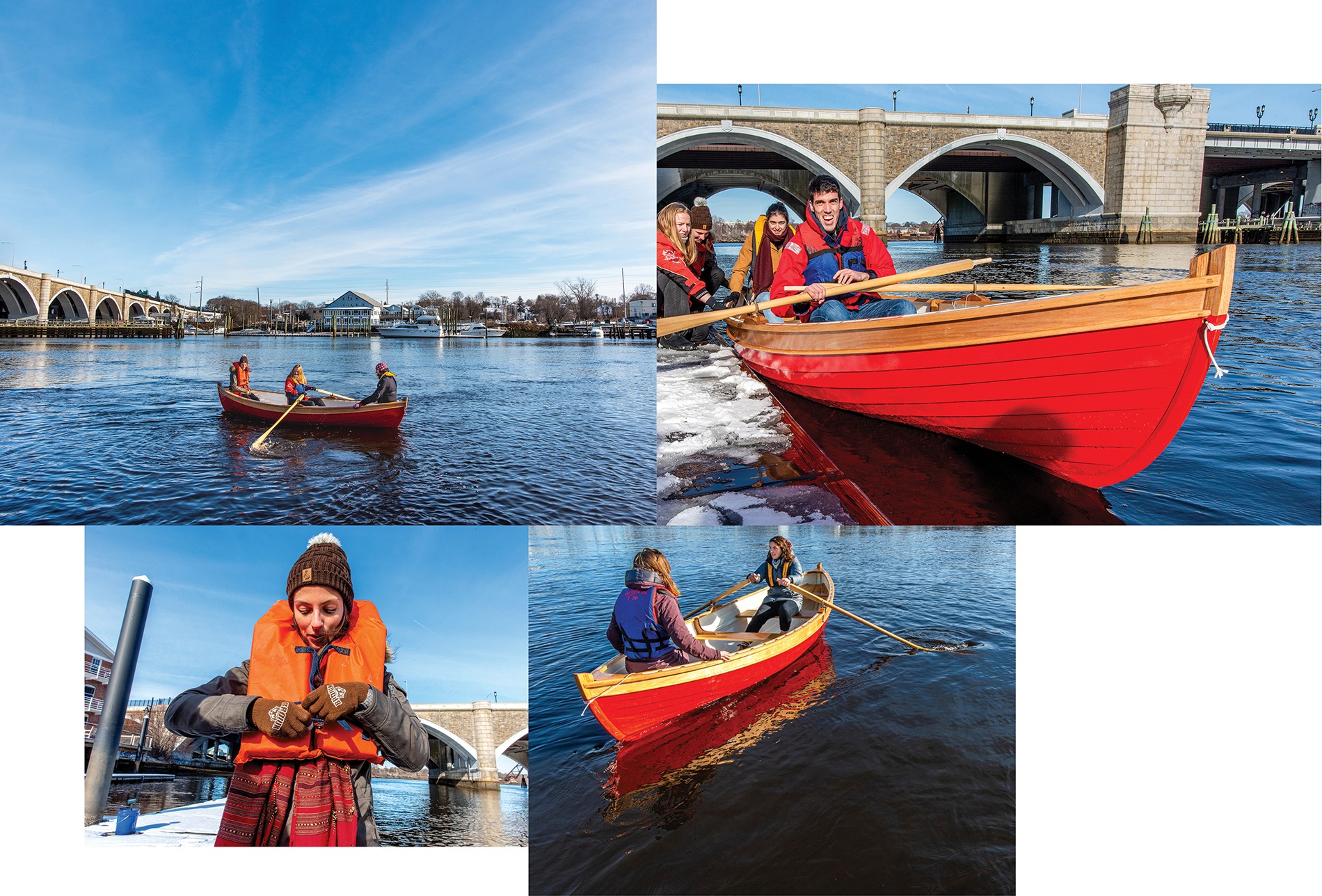 At semester’s end, students took turns rowing their boat in the icy waters of the Seekonk River.Photo: David DelPoio
Education

After months of sanding, sawing, painting, and thinking, students watched as their finished product, a wooden 14-foot Maine Peapod painted bright red, was lifted down into the cold waters of the Seekonk River. “It’s floating,” said Nat Hardy ’22, one of the students snapping pictures as the boat skimmed through the water. “We pass!”

In all fairness, students’ grades for Boatbuilding: Design, Making, and Culture,  cosponsored by the engineering and American studies departments, weren’t determined by their boat’s seaworthiness. Nevertheless, all involved in the building of the boat took great pride in the SS NC, a play on Brown’s Satisfactory/No Credit grading option.

“Creating something from nothing is a very interesting and powerful thing,” said Livia Polise ’22 after the class was over. “At the beginning you have wood, and in the end you have a boat that you can row and see.”

The idea for the course first came from Professor of American Studies Steven Lubar. He teaches a hands-on first-year seminar, Skill: From Flint-knapping to the Maker Movement, that studies the material culture of work and the intersection between human activity and the objects that surround us. Geoffrey Hazard ’21, a student in Lubar’s skill course, proposed a class visit to the workshop of Gerald “Shep” Shapiro, a former music professor at Brown who had taken up building boats.

The idea for the class was born then, with Lubar, Shapiro, Hazard, and Chris Bull, the director of the Brown Design Workshop, coming together to plan out the syllabus and seek funding sources throughout the University. One major source of funding came from the Brown Arts Initiative, which was able to bring Shapiro on as an artist-in-residence.

Deeper learning
Over the course of the semester, 17 students, working primarily in the Brown Design Workshop attached to the engineering building, built work tables, designed molds, and journaled about boatbuilding.

One class each week was dedicated to a scholarly American Studies perspective on boats that pulled from readings in history, anthropology, and boat-building manuals. Students read everything from New Yorker articles to engineering texts to a chapter in an academic tome titled Defining Technological Literacy: Towards an Epistemological Framework. Another class, led by Shapiro and Bull, focused on a more tangible framework: building the boat itself.

Stem An extension of the keel, or “spine”of the boat. The stem refers to the most forward part of the keel to which planks attach to form the hull.

Gunwales The upper inside edge of a boat. The word comes from the term “gun wales,” structural supports for artillery.

Hog The oak plank on top of the keel that provides structural support for the boat.

Fair curve When wood is bent to form the hull of a boat, the curve must
be gradual and consistent, without any bumps or other inconsistencies. Boatbuilders often  gauge this by eyeballing.

Maine Peapod The Peapod has been built for generations as a working boat for the men and women who harvest fish and lobster in the Gulf of Maine. The design was simple enough that people could build their own boats, but strong enough that Peapods could remain seaworthy for years.

Students had to develop an understanding of ideas such as a “fair curve” (see right) and be able to visualize the three-dimensional structure of the vessel from numbers on a sheet of paper. Questions arose about the use of automated machinery, such as the CNC router in the Brown Design Workshop, versus working on parts by hand. Even though the technology existed, in some cases creating pieces for the boat by hand was easier. After all, says Bull, “the computer doesn’t know what a fair curve is.”

“Brown students are on top of an intellectually demanding project, but maybe they’ve never done a physical project like this before,” said Shapiro. “It’s not only about learning how to saw, but learning to think about putting together a sizable object… I think the learning is deeper and broader.”

Sofia Sacerdote ’22, a student in Brown’s Program in Liberal Medical Education, connected the boat building class with the idea of surgery, seeing the work of tools, people, and procedures as not so different from a medical team. “I think I’ll recall this class and remember it a lot more than physics or organic chemistry. It’s good to think of tools intersecting with materials and people and how you work within a team.”

Patience please
On the first day of class students started with a blank slate. Everything was built from scratch, including the work tables that the SS NC would eventually sit on. Students built molds, stems, and frames for the vessel, then began planking. The class used the lapstrake method, which meant each individual plank, 18 in all, was attached with epoxy, with the planks overlapping one another. With the completion of the planking the class was finally able to flip the boat, a major milestone.

Next the students rushed to sand, prime, and paint the vessel, trying to finish the boat so they could test it out during finals period. The class settled on a white interior and red exterior. One rejected design called for a Scooby-Doo themed “Mystery Machine” boat with a turquoise base and orange flowers.

The project culminated on a chilly December day at the Brown Boathouse, where the vessel was lowered into the water. Students and professors took their turns at rowing, some more successfully than others. A rescue boat was present to snag those who went too far afield. Friends snapped pictures and there were celebratory donuts and champagne.

The plan for now is to display the SS NC in the Granoff Center in May. After that it might be donated to a community organization or sold, with the hope that some funds can be raised to support a similar class in the future.

“A lot of classes you take them, you finish them, and your work in that class is done,” says Polise. “But for this class I can show my parents, look at this boat that I made. There’s a sense of pride in that, too.”