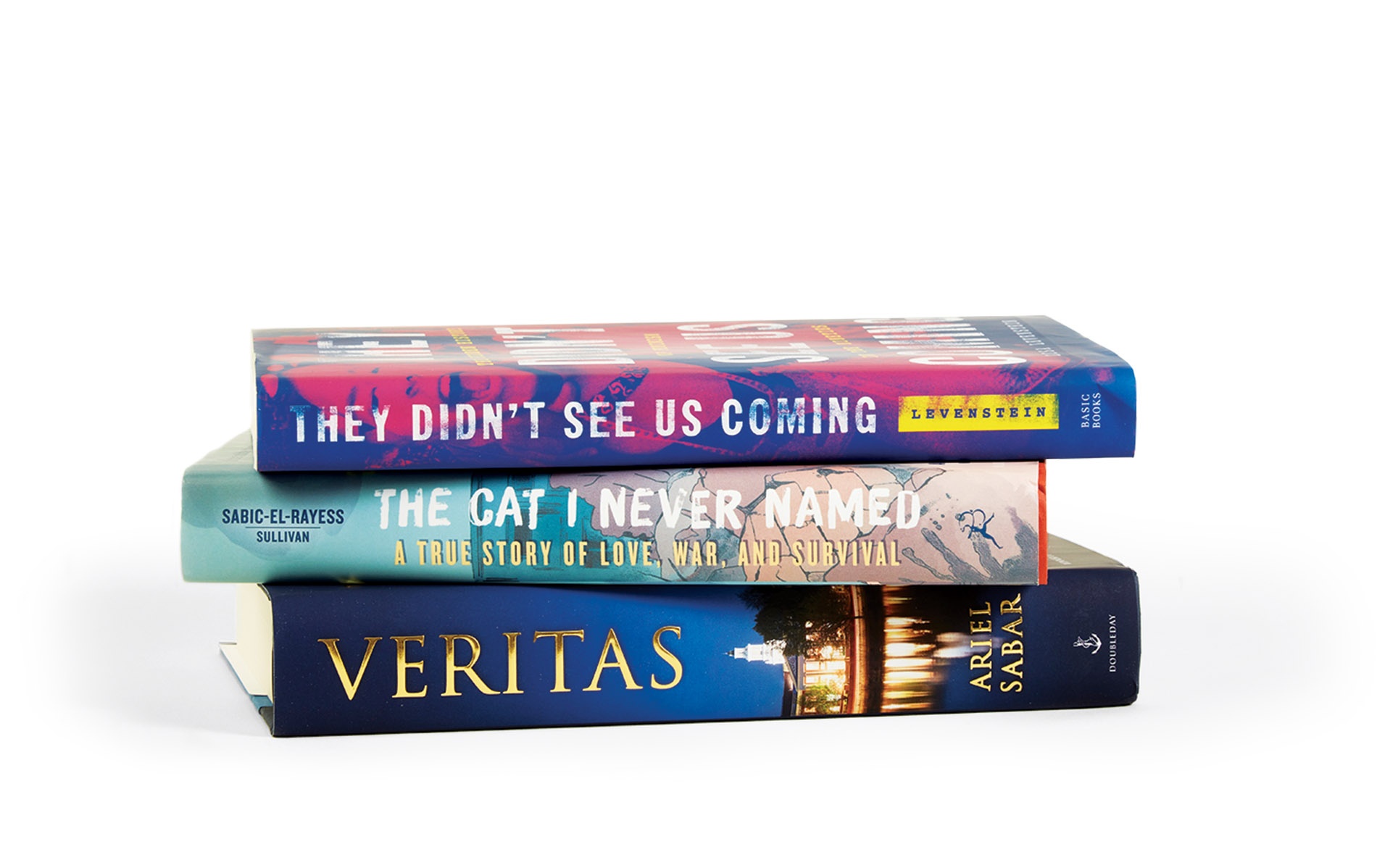 They Didn’t See Us Coming: The Hidden History of Feminism in the Nineties by Lisa Levenstein ’94 (Basic Books)

“Is Feminism Dead?” That was Time magazine’s late June cover story in 1998. But here Levenstein, a history professor at the University of North Carolina, Greensboro, argues that feminism became deeply, if quietly, embedded in ’90s culture. She points to moments like 1995’s United Nations World Conference on Women in Beijing, which brought together 30,000 activists from around the world, and adds that new theories of feminism and ways of organizing enlivened the movement. The result is a vivid account of a forgotten history.

The Cat I Never Named: A True Story of Love, War, and Survival by Amra Sabic-El-Rayess ’00 with Laura Sullivan (Bloomsbury)
Sabic-El-Rayess was just 16 in 1992 when Serbian tanks clanked into her town of Bihać, near the Bosnian-Croatian border. That day upended her Muslim family’s life and signaled the start of a 1,100-day Serbian siege. It was also the day that Maci, which means “cat” in Bosnian, followed her home. This crisp and sometimes intense YA memoir describes how, with luck, her family survived the ethnic cleansing, and how Sabic-El-Rayess managed to still go to school, hold onto friendships, and finally come to the United States.

Veritas: A Harvard Professor, A Con Man, and the Gospel of Jesus’s Wife by Ariel Sabar ’93 (Doubleday)

The possibility that Jesus might have married intrigued and confounded the religious world in 2012 after Karen King, a Harvard Divinity School professor, announced the discovery of a second-century papyrus fragment that hinted this was the case. If true, it would disrupt thousands of years of Christian teachings. The claim unraveled as scholars started to suspect forgery—King, it turned out, had been duped. In this deeply reported book that reads like a mystery novel, Sabar, who won the National Book Critics Circle Award for My Father’s Paradise, chronicles the twisted history of the fragment and the scandal that followed.

The Weaponized Camera in the Middle East: Videography, Aesthetics, and Politics in Israel and Palestine by Liat Berdugo ’08 (Bloomsbury)

Manhua Modernity: Chinese Culture and the Pictorial Turn by John A. Crespi ’86 (UC)

Will He Go?: Trump and the Looming Election Meltdown in 2020 by Lawrence Douglas ’81 (Twelve)

The Play in the System: The Art of Parasitical Resistance by Anna Watkins Fisher ’09 AM, ’12 PhD (Duke)

The Evolution of Luxury by Ian Malcolm Taplin ’86 PhD (Routledge)

Year of the Rabbit by Terence A. Harkin ’68 (Silkworm)

The Mathematical Investigations of Dr. O and Arya by Arya Okten ’20 (Tumblehome, Inc.)

Sex, Race, and Robots: How to Be Human in the Age of AI by Ayanna MacCalla Howard ’93 (Audible Originals)