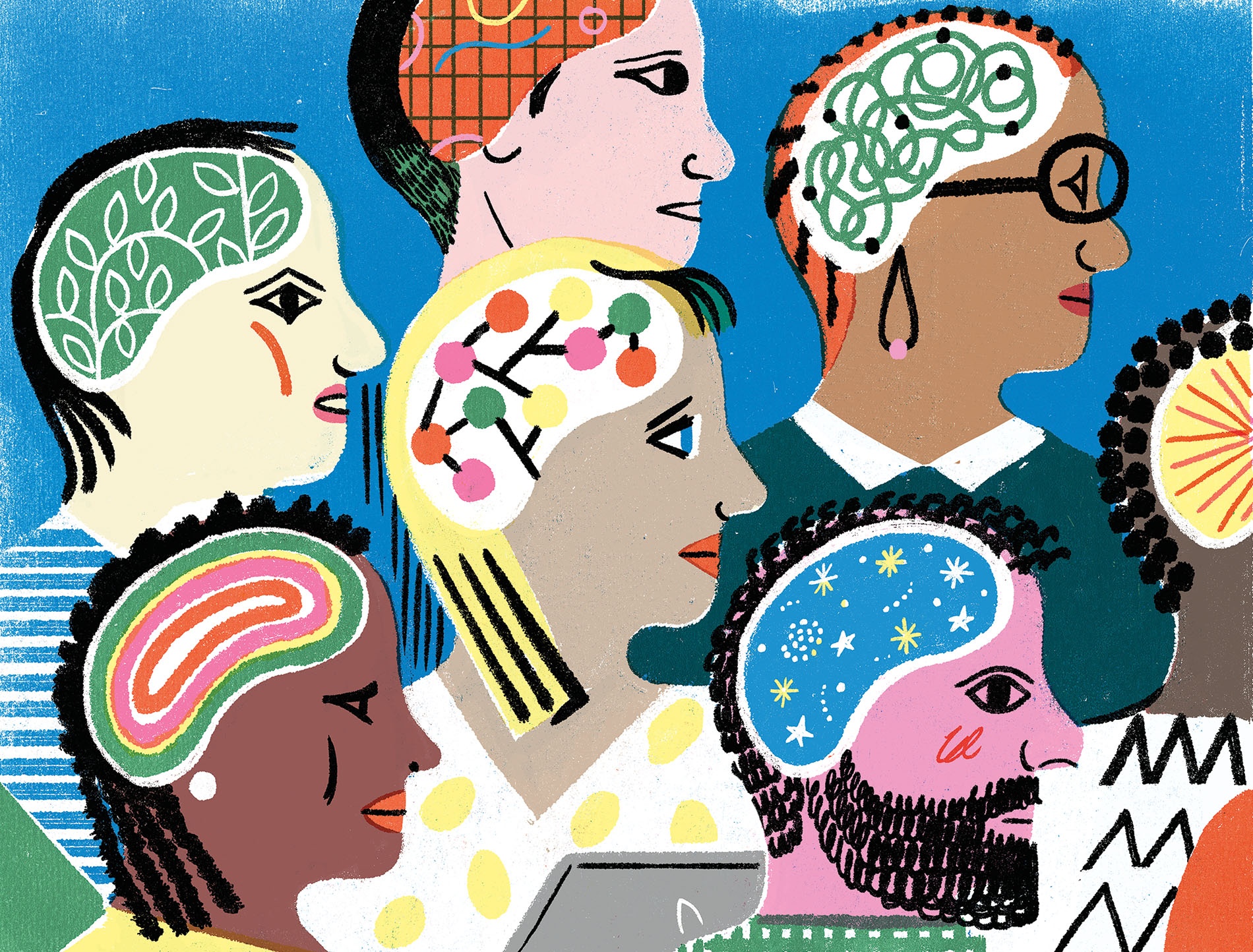 Frontal Lobes and Fun
Neuroscience 10 continues to tickle the grey matter of future scientists—and everyone else.

Halfway through John Stein’s lecture on the anatomy of the human brain hundreds of students in Brown’s largest lecture hall, the Salomon Center, began bobbing their heads up and down. Stein was in the middle of explaining the symptoms of bacterial meningitis, a deadly dangerous infection of brain tissue. It turns out that a simple bobbing of the head can test for an inflamed dura mater, a key symptom of brain infection.

In Neuroscience 10, one of the largest first-year courses at Brown—more than 400 students typically enroll—hard science meets humanities in the starkest way possible: the brain learning about the brain. Since only about 80 undergrads choose neuro for their concentration, most who take the class are humanities concentrators taking advantage of the Open Curriculum—even RISD students enroll.

“Who wouldn’t want to understand how their brain works?” asks Stein, a distinguished senior lecturer in the neuroscience department who has been involved in teaching Neuroscience 10 for more than 20 years. “In astronomy, you go look out at the stars and wonder about that. And in neuroscience you look at the brain and wonder, gee, what do we know about what’s in there?”

Exploring the Brain, the textbook used in the class, was written by Paradiso and two other Brown professors—Barry Connors who is still at Brown, and Mark Bear, now at MIT—and first published in 1995.

With more than 500 full-color images and sidebars with fun and weird facts to break up the hard science, the text is used by hundreds of colleges and universities and is translated into multiple languages.

When Paradiso came to Brown in 1990, he explains, he was asked to write a chapter in what became the first, rather disjointed, spiral-bound “intro to neuro” text at Brown. He, Connors, and Bear felt they could do better.

More than 25 years later, Exploring the Brain is going into its fifth edition and other professors often reach out about how they can replicate Brown’s methods. “I know for a fact that we’ve seeded neuroscience programs in other places,” says Paradiso.

Neuroscience 10 has a uniquely Brown story: It started as a Group Independent Study Project initiated by students in the 1990s, but has grown in the decades since to become one of the largest classes at Brown, reflecting the transformation of neuroscience from a budding field to an area of intensive research and funding. Neuroscience study started at Brown in the 1980s, even before a formal department was created. “When I came to Brown in 1990,” says neuroscientist Michael Paradiso, who co-teaches the course, “word on the street was that it was the first neuro program in the country.”

Neuro 10 is meant to be a broad introduction to all of neuroscience, with no prerequisites but a content-heavy approach on neurons, motor systems, and human cognition. “It’s mental illness, it’s molecules, it’s behavior, it’s all of that stuff,” says Paradiso. For students, it’s either a stepping stone to more advanced courses, or simply an introduction for non-STEM-inclined Brown students to better understand the human mind.

“The distance between the introduction to the field and the cutting edge is short enough that you can span it quickly,” says Stein, contrasting the course with introductory courses in chemistry or physics. “We’re so blasted ignorant about neuroscience that you can kick the dirt and find gold underneath,” jokes Paradiso. “You don’t have to dig forever to find new things… and surely that’s part of the appeal to students.”

“I’ve always been fascinated by why people are the way they are, and why they do what they do, and I’ve thought that the brain is the key to those questions,” says Katie Unger ’23, a neuroscience concentrator from Connecticut and a teaching assistant for Neuroscience 10.

Unger says she first got interested in the brain while taking a high school psychology class, but after taking Neuroscience 10 with Stein and Paradiso freshman year she was hooked. “It felt very relevant,” she says. Her daily meditation practice stems from independent study and research on the connections between mindfulness and brain health.

Everett Gutterman-Johns ’25, a prospective neuroscience concentrator from Salem, Oregon, says that he was drawn to the course to better understand the social context of brain development and the impact our environments can have on how the body functions.

Another freshman, Niki Chen ’25, who hails from the Bay Area, says that her interest in the brain was sparked after working at a daycare center for adults experiencing dementia and Alzheimer’s. Emmajane Rhodenhiser ’22, a neuroscience concentrator from Ann Arbor, Michigan, is in her third semester as a teaching assistant for the course. She says that time and again, students are drawn to neuroscience because of its seeming applicability and the promise of being able to “understand people.”

Students and teaching assistants say one particularly important lecture each year is the one on the brain and mental health. In it, Stein explains mental health disorders—such as major depressive disorder, schizophrenia, and bipolar and anxiety disorders—from a neurobiological standpoint and discusses the major brain systems involved.

Stein and Paradiso say they’re aware the course is a big draw for freshman, so they try to keep the content fun and accessible. Every year at Halloween there’s a costume contest where students dress up as different parts of the brain, and after Thanksgiving there’s a T-shirt design contest. The class votes on their favorites and the department prints and sells them to interested students.

At the end of a brain anatomy lecture, after spending an hour and a half explaining the intricacies of meninges, testing for meningitis, and holding up an example of a fixed spinal cord, Stein pulls a human brain, shaded in tones of brown and green, out of a plastic bag. He handles it underneath a camera, projecting it out onto a 50-foot wide screen in Salomon Hall, pointing out to hundreds of students the dura mater, the cerebellum, and the opening between the brain’s hemispheres.

Unger puts it best. “It’s incredible to sit in lecture and realize, my brain is learning about itself right now.”

Neuroscience—fascinating! So many different aspects and pathways! Let’s have an alumni/ae forum during Commencement Weekend on this very topic!

Interesting article. I believe that the history of neuroscience (and the Intro to Neuroscience course) at Brown goes back further than you indicate. As an undergraduate and graduate student in the 1970s I studied neuroscience through the psychology department and faculty in anatomy, physiology, and pharmacology in the medical school. I distinctly remember a team-taught Intro to Neuro course in the mid 1970s offered by Mitch Glickstein, Ford Ebner, Jim McIlwain, and others. The content of the Bear, et al. textbook that you refer to (which I used teaching neuroscience courses at UNH) closely parallels what was taught in that course. At the time there were a number of well-established neuroscience programs at other universities.

Thanks for the story on Neuroscience 10—it’s refreshing that so many non-concentrators are interested. Brown’s scholarly contributions to the nascent field of neurosciences date from at least the 1970s, when its multidisciplinary aspects attracted Nobel Prize Laureate Leon Cooper and others, including Professors Jim Anderson, whose course called Understanding the Brain (if memory serves) I had the good fortune to take in 1975-’76. Even though a subsequent independent study with Dr. James T. McIlwain disabused me of any notion of pursuing neuroscience (or biology, for that matter) as a career, the mind and the brain continue their fascination.