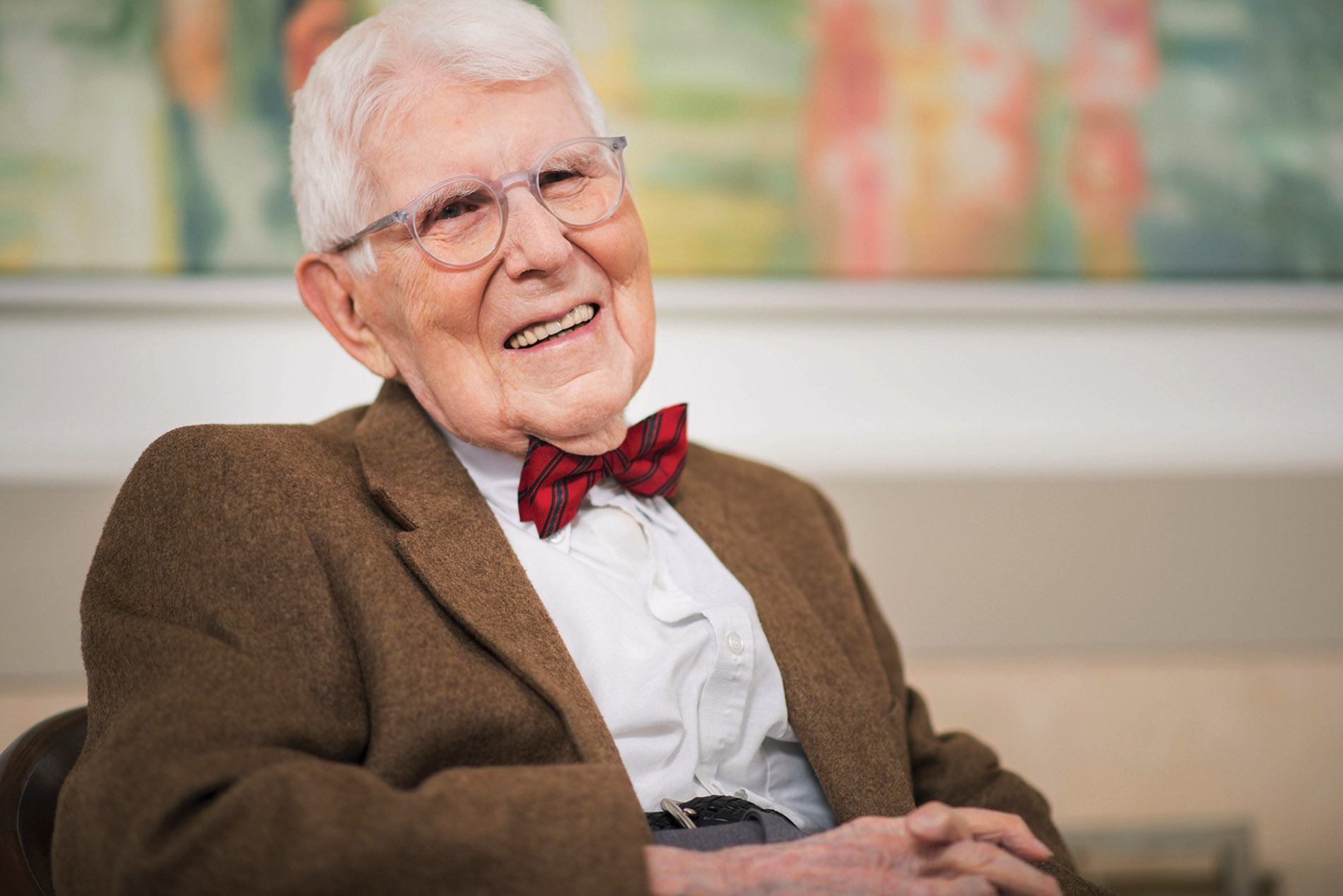 Aaron Temkin Beck ’42, known to friends and family as Tim, and known to everyone else as the father of cognitive behavioral therapy, or CBT, died on November 1 at the age of 100. He was one of the most influential psychiatrists of all time. Beck was famous for his jaunty bowtie, shock of white hair, driving curiosity, and love of conversation. “There is more to the surface than meets the eye,” he was fond of saying—a twinkling commentary on CBT’s refusal of the traditional psychoanalytic focus on depth. Above all, he was a healer. As one grandson put it during the funeral service, “For tens of millions suffering from invisible disease, he offered comfort and solace and hope.”

To understand how CBT is different from traditional psychoanalysis, imagine you’re walking along the beach and step on a broken bottle. Do you see it as an archaeological artifact and dig down into the sand to locate its source? Or is it trash, to be kicked out of your way? In psychological terms, the first response represents something like traditional Freudian analysis. Your dreams, your every thought and fear, are seen as symptomatic of deep truths churning their way up to your mind’s surface. Kicking harmful trash out of the way is more like the approach of CBT, a psychological intervention that asks you to disregard some of your brain’s junkier, more destructive thoughts in the interest of better mental health. Since its introduction in the 1960s, CBT has eclipsed Freudian analysis to become the most widely practiced, most effective treatment for depression—and many, many other illnesses, including anxiety, OCD, PTSD, and substance use disorders.

Beck was attracted to neurology—the rigor and science of it—and began an internship at Rhode Island Hospital. At this same time, Phyllis Whitman ’49 was a student at Pembroke. As Phyllis—now Judge Phyllis Beck, the first woman to serve on the Pennsylvania Superior Court—recalls, “We had no faculty, just a dean and the gym teacher, Miss Rudd. It was right after the war and the male students were all seasoned and older—they were coming back on the GI bill and all our classes were coed. It was a very exciting time.” Tim Beck came to a talk Phyllis was giving at Hillel. What was it about? “Oh, some kind of Jewish subject,” she says, laughing. “I don’t remember. He was there looking for Pembroke girls. He got my number from one of his cousins after.” They married in 1950.

At Rhode Island Hospital, Beck was busy not becoming a neurologist. Thanks to the shortage of psychiatry residents, he was required to complete a six-month psychiatry rotation—a turn of events that would reshape the entire field. Was it a good fit at the time? It was not. Devoted as he was to the discipline of evidence-based science, he found psychoanalysis to be something more akin to faith healing. “The psychoanalytic mystique was overwhelming,” he told a reporter in 2009. “It was a little bit like the evangelical movement.”

He stuck with it anyway—the people were smart, the subject inherently interesting—completing more psychiatry residencies, fellowships, and a stint as chief of neuropsychiatry at the Valley Forge Army Hospital (he was enlisted during the Korean War), before joining the department of psychiatry at the University of Pennsylvania in 1954.

There he began research into depression, intending to prove the efficacy of classic Freudian talk therapy—the kind parodied by all those couch cartoons in the New Yorker. He couldn’t, instead finding evidence in his patients of what he called “automatic thoughts,” the kind of negative self-perceptions (“I’m unlovable,” “I’m dangerous,” “I’m stupid”) that create bad feelings and unhappiness. The cognitive methods he developed and tested were designed to help people evaluate and, ultimately, disprove these harmful distortions. And he found that patients not only got better—they got better quickly, often in months instead of years.

“There wasn’t a eureka moment,” Phyllis recalls about the development of CBT. “He was a numbers guy. He would do experiments and find results and then write papers. It was just a lot of hard work.” His grandson Andrew Beck ’02, ’06 MMSc, ’06 MD, remembers his grandfather wearing a kind of counter on his wrist on which he tracked his own automatic thoughts, and summarized his grandfather’s approach as a “persistent accumulation of data over decades.” The results were simply astonishing. “Even me,” Andrew says, “people come up to me all the time to tell me that his work has had such an important impact on their life.”

Family members attributed Dr. Beck’s long life to his deep and roving intellect, positive outlook, capacity for connection, and wide-ranging passions. “He was still sharper on the day he died than most people will ever be,” son Roy Beck ’74 recalled in a eulogy. Reflecting on her late husband’s longevity, Phyllis says, “He was really interested in everything. And he had a lot of willpower. He actually thought he’d make it to 105.”

Aaron Temkin Beck is survived by his wife of 70 years, Judge Phyllis Beck ’49; four children, including Roy Beck ’74; 10 grandchildren, including Jody Beck ’00, Eric Beck ’08, and Andrew Beck; and 10 great-grandchildren. He also leaves more than 20 authored and coauthored books; a 57- page-long list of publications; the Beck Institute for Cognitive Behavior Therapy, which he cofounded with his daughter, psychologist Judith Beck; and the 2006 Albert Lasker Award for Clinical Medical Research (essentially the Nobel Prize for doctors).