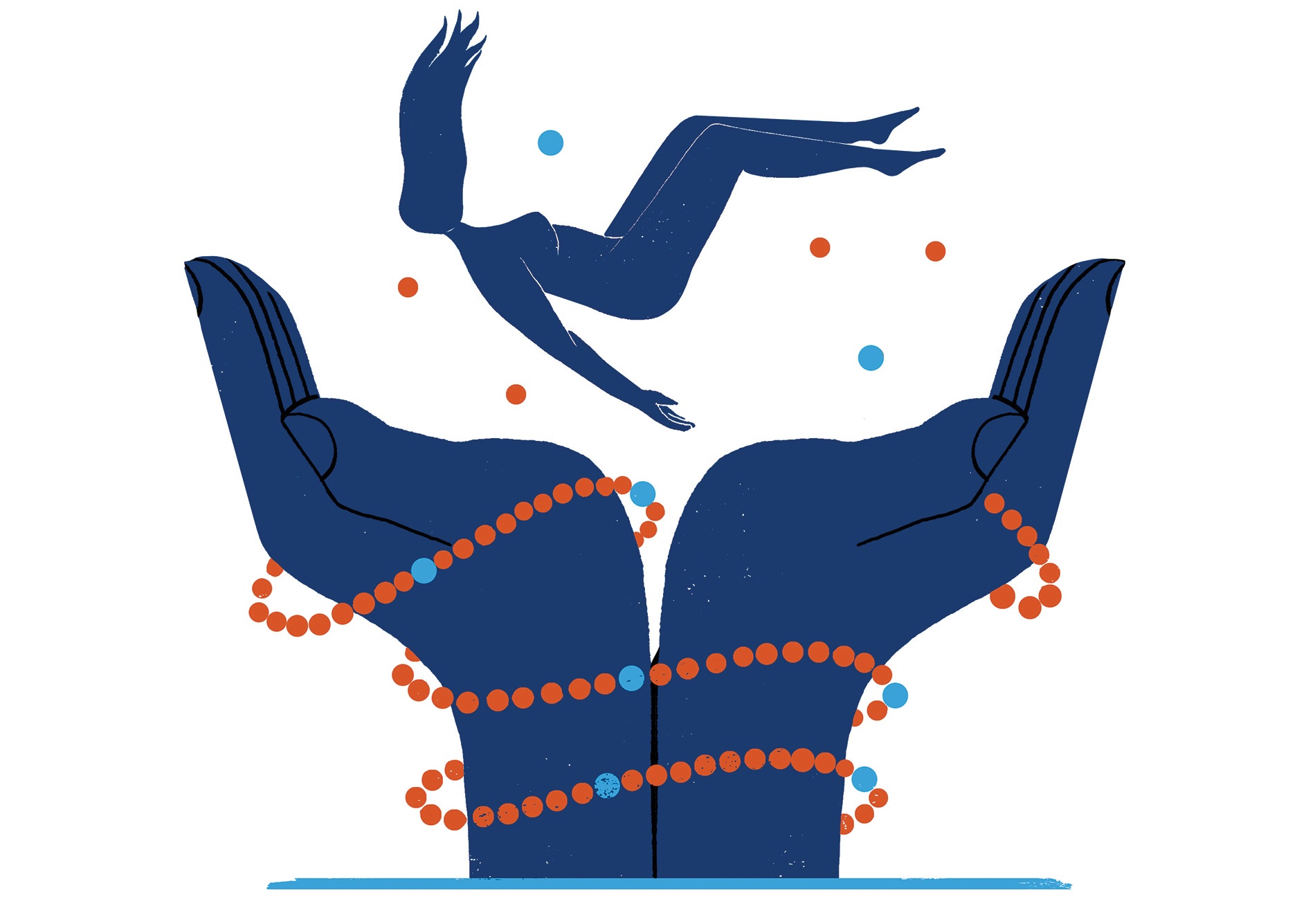 A Theology of Choice
Before Roe v. Wade, Brown chaplains led a state-wide group of ministers and rabbis that helped women get safe abortions. They saw it as their religious duty.

401-331-74XX. During the late 1960s and early 1970s, women in Rhode Island could dial this number (now a private residential line, so we’ve obscured the last two digits) if they wanted to reach the Rhode Island Clergy Consultation Service on Abortion and Problem Pregnancies (RICCSAPP). At a time when abortion provision and abortion referral were both illegal in Rhode Island, this hotline became a lifeline for hundreds of women facing unwanted pregnancies. Women who dialed it would hear a recorded message listing the names and contact information for Protestant ministers and Jewish rabbis.

This phone number once rang in the home of Jill Horton Lyons ’71, whose first job after college was RICCSAPP coordinator. After RICCSAPP’s founding in 1969, Brown became a hub for the organization’s activities. Reverend Richard Dannenfelser, Rabbi Richard Marker, and Beverly Edwards, a lay counselor, all worked in the chaplains office and were key RICCSAPP members. Lyons ran the clergy’s meetings, organized their services, and vetted abortion providers to ensure that they provided safe and holistic services. Meanwhile, the clergy themselves engaged in acts of civil disobedience by offering women “problem pregnancy” counseling and, if requested, abortion referral.

“People really died. Younger people today when they look at these laws have no understanding of what that really means in terms of their own lives and people of their own generation,” former Brown Chaplain Rabbi Richard Marker explains about abortion access before Roe v. Wade. “I don’t remember whether it was the fall of ’68 or spring of ’69,” Marker recalls. “Three undergraduate women students came to me very upset because a friend of theirs had just died in a back-alley abortion.”

Decades of conservative religious activism has cemented a narrative that places religion and reproductive rights as countervailing forces. But before Roe, mainline Protestant and Jewish clergy were in the vanguard of abortion rights activism. In response to an epidemic of dangerous back-alley abortions, numerous religious denominations affirmed the need for abortion-law reform or repeal. They articulated a theology of choice that affirmed the sanctity of women’s health, privacy, and reproductive freedom. One group, the Clergy Consultation Service on Abortion (CCS), helped hundreds of thousands of women across the United States access abortion services.

The first branch of CCS was founded in New York City in 1967 by the Reverend Howard Moody and a small group of ministers and rabbis. They openly declared that it was their “pastoral responsibility and religious duty to give aid and assistance to all women with problem pregnancies.” By 1969, clergy at Brown joined with colleagues across the state to quietly form RICCSAPP, an affiliated branch of the CCS. Its mission statement explained:

The present abortion laws require as many as a million women in the United States each year to seek illegal abortions which often cause severe mental anguish, physical suffering, great financial hardship, and unnecessary death. These laws often compel the birth of unwanted and unloved children. We believe a truly human society is one in which the birth of a child is an occasion for genuine celebration, not the imposition of a penalty or punishment upon the mother.

CCS clergy were at the front lines of the medical crisis created by restrictive abortion laws. In their congregations and as chaplains on college campuses, they encountered women agonizing over the prospect of an unwanted child. They witnessed the physical suffering caused by botched illegal abortions. One RICCSAPP clergyman told the Providence Journal in 1972, “I have talked with at least 250 women, many of whom feel trapped, victimized, used, and alone. Some are so desperate and isolated they threaten suicide or seek the help of a coat-hanger wielding back-alley butcher or gulp down all kinds of violent and lethal solutions.”

“As a chaplain, you function in these interstices between understanding the claims of institutions on your traditions and being available to people where they are.”

In response to what they saw as a public health crisis, some clergy deemed restrictive abortion laws immoral. For Reverend David Ames, who served as an ecumenical chaplain at Rhode Island College in the early 1970s and later came to Brown as an Episcopal chaplain, abortion “was a critical issue of justice. If there’s one thing that the Bible teaches, it’s a message of social justice and being on the side of the poor and disadvantaged and being in solidarity with them.” Rabbi Marker saw his role as a chaplain and as a member of the CCS as “balancing the claims of legitimate individual kinds of needs against social structures and laws that did not reflect humane considerations…. As a chaplain, you function in these interstices between understanding the claims of institutions on your traditions and being available to people where they are—and if that challenges existing structures, so be it.”

In the late 1960s and early 1970s, Rhode Island physicians and Planned Parenthood sent hundreds of women to RICCSAPP’s doorstep. These women came from all walks of life. At first, RICCSAPP’s clients were mostly university students, but as word spread, women from around Rhode Island and neighboring towns in Massachusetts came for help. According to the limited statistics that RICCSAPP kept, the majority of these women were married, had children, and were Catholic.

CCS clergy like Rabbi Marker, Reverend Dannenfelser, and Reverend Ames met with them and helped them explore options for dealing with their pregnancy, including keeping the child, adoption, or abortion. “The big thing,” Reverend Ames recalls, was “listening to their stories and what happened to them.” Most women who met with clergy chose abortion. In turn, the CCS directed these women to carefully vetted providers. In the first years of the service, Rhode Island clergy sent women abroad to Montreal, Puerto Rico, or England. When possible, they sent women across state lines to nearby providers. However, these patchwork medical networks were overtaxed and fragile. A police raid or an overzealous prosecutor could ground referrals to a halt.

In 1970, after New York legalized abortion, the dynamic shifted. The CCS worked closely with a nonprofit clinic in New York City. Affiliate groups around the country shifted the bulk of referrals there. The liberalization of abortion laws in New York and other states dramatically drove down the cost of abortion and reduced the time it took to obtain the procedure. Reverend Ames recalls sending about 60 clients a month to New York State after 1970.

However, legalization raised new challenges for abortion provision. By 1972, the CCS network spanned at least 40 states. Since the group’s inception, CCS clergy had sought to counter a climate of silence, misinformation, criminality, price-gouging, and medical malfeasance. The members of RICCSAPP realized that legalization in New York didn’t erase these problems. So that year RICCSAPP went public, announcing their existence through a front-page article in the Providence Journal. In doing so, members risked arrest, prosecution, and blowback from the Catholic Church; but flouting state law was necessary, the group said, in order to offer time-sensitive care to women and to neutralize opportunistic and expensive abortion providers in New York state’s wide-open market.

Until medical services were local and not-for-profit, they argued, criminalization would continue to burden Rhode Island women in interrelated ways. First, it prevented women from learning about their medical options in a timely manner. Second, it made obtaining reproductive health care more time consuming, costly, and stressful. One CCS clergyman explained to the Providence Journal, “There is a very real fear for some—say a young girl from Woonsocket who has never been to Providence, let alone New York—especially when the trip coincides with an abortion.” These financial and travel stresses compounded with clients’ difficulty in learning about and assessing the quality of health care providers in a different state.

Roe v. Wade ameliorated, at least for a brief moment, many of these problems, creating the possibility of local providers and giving women access to a range of reproductive choices. Today, amid an unprecedented effort to reverse Roe, the CCS’s message about faith and reproductive choice still resonates. As one Rhode Island minister told the Providence Journal, “I cannot decide for another, but what I can be is present—helping to create a context which is supportive, compassionate, and loving.” But the past, with women dying from illegal abortions, also looms large for Rabbi Marker. “The thing that is scary to me is that people are going to wake up one day and say ‘wait a minute, I can’t believe I was too busy paying attention to something else and my rights along these lines have been taken away from me.’”

Read our other article in this package, “Holding the Line,” about Brown pro-choice activism over the years. (According to Brown’s archivists, there has not been significant anti-abortion activism at the University.)

Reader Responses to A Theology of Choice

In 1764 Brown was officially established under the chief direction of the Baptists. Dr. Frank identifies “Catholics” as the primary opponents to abortion. When I began studying at Brown in 1949, freshmen were still required to attend a weekly “Chapel” in Sayles Hall encompassing moral values. Jews and Christians for more than 21 centuries (the Jews much longer) have regarded the [deity] named “I Am” as the true God who put first in His revealed Commandments: “You shall not kill.” Unfortunately, because we live in an imperfect world, moral theologians have had to indicate that killing a person can sometimes be justified through one’s properly formed conscience, such as in self-defense. Abortion clearly is the killing of an unborn human being. This can not be broadly permitted from a moral point of view. Ideally, an unwanted child should not be conceived to begin with. There truly is no way in this context to define an abortion entirely a health issue. This situation can be dealt with only with fully understanding and doing what “I Am” intends.