Someone Really Loves You

The class of 2007, the first to enter brown need-blind and the 239th to earn degrees 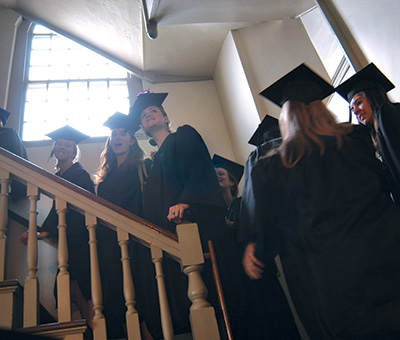 Anxious, relieved, overjoyed, and excited all at the same time, the class of 2007 graduates settle into the First Baptist Meeting House for the Baccalaureate ceremony.

from the University, strolled through the Van Wickle Gates one last time on Sunday, May 27, and just kept on walking. What lay ahead for the 1,529 graduating seniors, the 93 new MDs, the 529 advanced-degree recipients (359 masters and 170 PhDs) may not have been as clear as many would have liked, but no matter. Jubilant and relieved, they promenaded at Campus Dance Friday, the air balmy enough for the women to wear spaghetti straps and sandals. By Sunday, breezes cooled the thousands of relatives and friends awaiting the graduates on the College Green. As tradition dictates, the seniors arrived after assembling at the First Baptist Meeting House, but with class size creeping up, the church can no longer contain the class. Beginning last year, seniors now gather on the church grounds for a brief symbolic ceremony before joining the graduate students and MDs on the Green. President Ruth Simmons opened the ceremony from a stage in front of University Hall, eloquently rolling through the customary Latin sentences before announcing that the women’s crew had just won the national championships in Oak Ridge, Tennessee. She’d given the rowers their diplomas a few days earlier and sent them off with her blessing. (See Sports, page 16.) “I’m so proud,” she intoned with a wide grin. 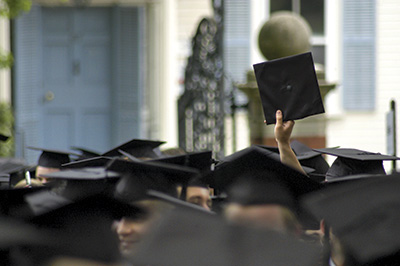 Last year’s Nobel Laureate in medicine (and the May/June BAM cover subject), Craig Mello ’82 was one of the nine luminaries to receive honorary degrees. (For the others, see page 31.) The afternoon before, in his Baccalaureate address, he had reminded graduates that every single atom inside of them was once inside a star. “You are really lucky,” he said. “Most of the carbon atoms are still out in space. Some are graduating from Yale or Harvard.” Mello, who was also celebrating his twenty-fifth reunion, further observed that humans share most of their DNA with worms. “Yes, 2007, you are formed from stardust, but you are also related to a worm.” In a break from the “go-forth-and-conquer” platitudes usually heaped on graduates, Mello said the Nobel that he and Andrew Fire, of Stanford, had won was for a discussion more than a discovery. “We openly shared our ideas,” he said. “We were not afraid of being scooped.” Take time to talk, he urged students. “Science is a worldwide discussion. It’s imagining and then checking. It’s a humbling process. You’re either completely wrong or you’re only partly right.” 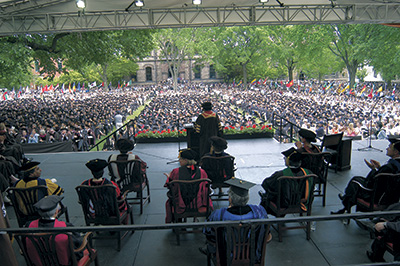 “You often hear about the importance of persistence,” he added. “Persistence is not enough. There comes a time when you have to give up. You have to know when to move on.” And he offered one more piece of wisdom: “Act on an idea. Don’t just talk about it.”

At Commencement, the faculty echoed that sentiment, awarding Brown’s highest honor, the Susan Colver Rosenberger Medal, to outgoing chancellor Stephen Robert ’62 for his boldness in hiring Simmons and embarking on the ambitious Plan for Academic Enrichment.

On Sunday Mello was silent as he accepted his honorary degree, as is the tradition at Brown. One honorary-degree recipient, however, couldn’t quite bring himself to abide by it. Blues guitarist B.B. King, now eighty-one, approached the lectern in his academic regalia (a novel sight in itself) and leaned toward the microphone. “I wasn’t supposed to say anything,” he confided to the thousands gathered before him, “but I got permission.” Lucille, his legendary guitar, was home asleep, he explained, but he was going to go ahead anyway. “After this I may never sell another recording. But my heart feels so good today. I’d like to sing a little a capella.” 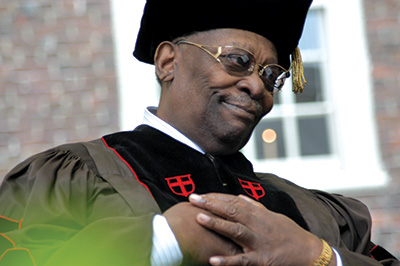 As the sun filtered through the elms, he crooned softly:

Someone really loves you.

So open your heart,

That someone who really loves you is me. 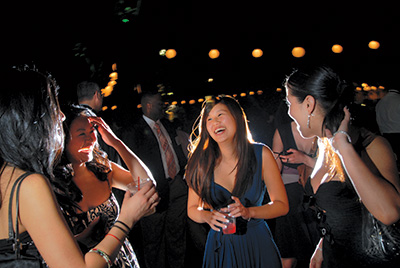 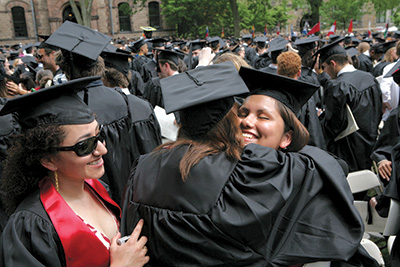 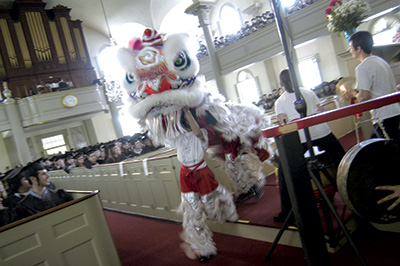 Entertainers delight the graduating seniors before the Baccalaureate address begins
What do you think?
See what other readers are saying about this article and add your voice.

Reader Responses to Someone Really Loves You